California is proposing that self-driving cars need a specially certified “driver”; are these restrictions a step in the right (or wrong) direction? #Californiarules 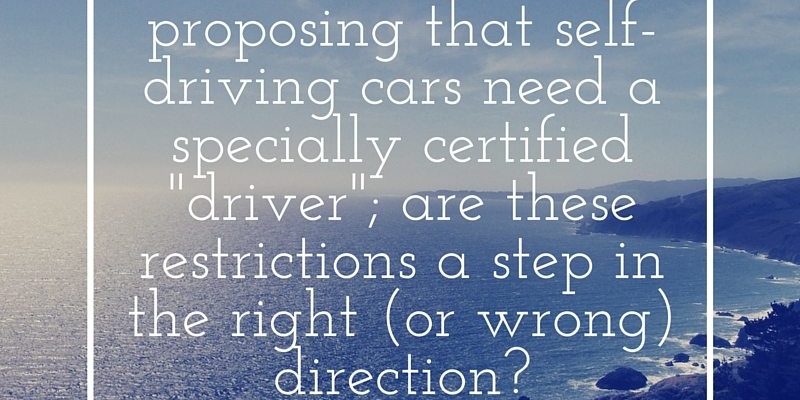 Under proposed new rules, you’d need certification to “drive” a self-driving car; this proposal demands that a fully licensed driver be in the front seat the entire drive time. California is proposing that self-driving cars need a specially certified “driver”; are these restrictions a step in the right (or wrong) direction? #Californiarules 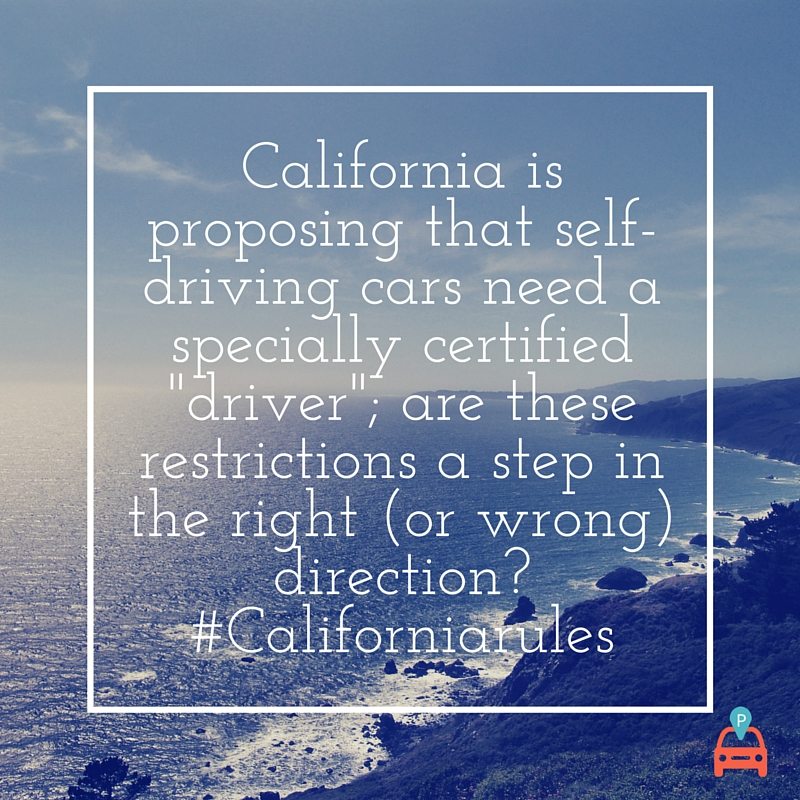 A 2014 University of Michigan study of public opinion on self-driving cars was inconclusive; people do like autonomous features in cars (self-parking, auto-braking, collision avoidance) but they don’t really want to give up all control. When it comes to a machine with no steering wheel, we humans feel we ultimately do a better job and are reluctant to give over control. California seems to concur.

We don’t yet know if self driving cars are safer than human-driven. Until self-driven vehicles are in widespread use we won’t have the statistics to make an open road comparison. Many current safety studies that lean toward calling self-driven cars safer come from those with a vested interest; big players in the market who face an uncertain regulatory environment in the future of self-driven vehicles.

These big players, companies like Google and Mobileye, are betting that self-guided vehicles will be a common sight in just 10 years and ubiquitous in 20, but in order to foster widespread adoption of radical new driving technology, they must sell unprecedented personal transportation safety to the public. Novelty and convenience won’t be enough to push the market to its full potential, although they will certainly play a large role in the continued development of fully autonomous vehicles.

Markets and technologies will always move faster than industry regulation, but regulation is inevitable and should be adopted to give the public, with its existing prejudice against machines, the confidence to widely adopt new driving technology. If this new market is to meet and exceed its potential, safety must be the driving force behind the industry as a whole. When combined with new conveniences, the fully autonomous vehicle will become the industry standard.

The autonomous, self-driving vehicles envisioned by manufacturers will not only offer unprecedented passenger protection; they will automatically utilize a wide host of convenience applications that cover every aspect of trip planning and execution, from navigation and hotel booking to en-route entertainment and internet access. Applications like ParqEx will even allow travelers to rent and automatically locate a parking spot in a city they don’t know, all at the touch of a button.

This future is rapidly approaching, but hang on to your Metra ticket for now. Manufacturers like Mercedes do not expect self-driving cars in the showroom until 2020, and we will not be seeing fully autonomous vehicles at the 2016 Chicago Auto Show. We will, however be seeing a host of highly advanced safety features, the very features that are paving the way toward the self-driving car.

For more information on this topic, please contact us.