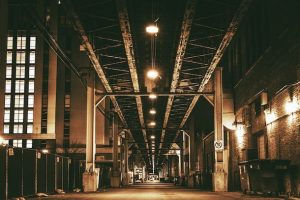 Photo: Fulton Market at night. Click this link to read this Built in Chicago article about Chicago’s startup supremacy.

There is never a dull moment in the world of technology as emerging companies continue to offer new products left and right.

From Uber, to Airbnb, to Tesla, new innovations are created each and every day, all across the United States.

Chicago is gaining recognition as the place for new companies who want to make it big. From Groupon, to Avant, to ParqEx, over 179 companies have raised funding in Chicago since 2015. 99 of them have raised over $1 million. New shared coworking spaces such as WeWork and COCO Coworking and Collaborative Offices have given startups the opportunity to work without worrying about an expensive rent. Rent expense is costly as it is one of the leading causes of failed startups during their early stages.

Various neighborhoods within Chicago have been host to many successful startups, like in the West Loop and River North. These neighborhoods are home to many newborn startups and are the centers of new ideas and innovation.

Over 1 million tech startups are created each year. Over 3,000 new startups have been created here just in 2017. Although few are destined to succeed, those who do can’t thank Chicago enough. Chicago provides startups with a wide world of business and tech. There are plenty of resources and networking opportunities. There is also a large amount of intelligent people who want to change the world for the better. It seems as though Chicago itself is constructing a marketplace of companies waiting to change the world. In 10 years time, it will be fascinating to see the impact that these now small startup companies will have on our life and society.

Check out this featured article from builtinchicago about the newest up-and-coming companies to know in 2017.