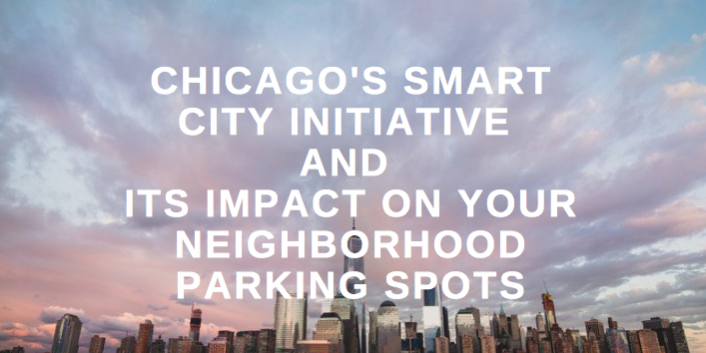 Cities like Chicago are getting smarter, and not just in a metaphorical sense. Urban areas are becoming increasingly connected, with the express aim of making life easier for both residents and anyone working downtown.

With its Smart City Initiatives, Chicago has been at the forefront of a trend that has swept the nation and even got an official endorsement and federal funding from the White House last year. But what does that mean for you? Among many other things, these initiatives may have a significant impact on your neighborhood parking spots.

Last year, the office Mayor Rahm Emanuel stated his goal to make Chicago “the most data-driven government in the world.” The goal is to use WiFi spots to report data back to the city and improve efficiency as a result. For example, sensors can keep park lawns from drying out, improve air quality, and more.

Smart City Initiatives are on their way across the globe, with cities like London, Barcelona, and Singapore leading the race to ultimate connectivity. Chicago is a relatively late entrant to the race, but has already established itself alongside them as a leader thanks to the initiative that the city calls “Array of Things.” Here’s how our government describes the project:

The Array of Things (AoT) is an urban sensing project, a network of interactive, modular sensor boxes that will be installed around Chicago to collect real-time data on the city’s environment, infrastructure, and activity for research and public use. AoT will essentially serve as a “fitness tracker” for the city, measuring factors that impact livability in Chicago such as climate, air quality and noise.

The description of the AoT as the city’s ‘fitness tracker’ is particularly descriptive in how it communicates the project as maximizing efficiency through technology. Anyone who wears a Fitbit knows just how important simply tracking your daily activities can be. You may not have been aware of how many steps you take during the day, but if you do, you will forego the elevator for the steps at the end of the day just to reach your daily goal.

The Internet of Things has become more common and is expected to continue rising in importance drastically in the near future. More and more, common household items are being connected to the internet to maximize efficiency. It’s no longer a surprise or science fiction to see stories about refrigerators ordering new food automatically on your behalf through smart connectivity.

By 2020, researchers estimate that $1.7 trillion dollars in consumer spending will be directly connected to internet-enabled household devices. Perhaps even more relevant for the purposes of this article, 90% of cars will be connected to the internet in the same time frame.

The Internet of Things as a City Connector

Take the IoT concept and apply it to larger urban areas, and you have Chicago’s Smart City Initiative (or Array of Things, depending on what you prefer to call it). The core concept is identical: the more connected you are to the environment around you, the more your life will improve and the more efficient you can be.

The success of that endeavor, of course, requires civic participation. As the City of Chicago outlines,

As smart cities embrace and deploy innovative technology embedded in public spaces, residents voices need to be represented. To prevent disconnect between residents and their city’s technology, broad engagement is key — not only to inform residents of innovations, but to take inventory of public concerns and questions associated with them.

This Smart City Initiative, then, is more than just an abstract concept deployed by the local government without direct impact on its residents. Instead, it’s a comprehensive project that depends on and benefits from constituency input. With that information, the Array of Things transforms into a powerful tool to improve your life and work. And that benefit is perhaps nowhere more obvious than in the ways in which parking connects to the project.

Whether you live or work in Chicago, you know how problematic parking can be. It is either expensive or impossible to find. The parking spots are there, and some of their owners may even be desperate to give them up to anyone who asks. But without a way to connect the spots to the drivers who seek them out, major inefficiencies remain.

That’s where parking connected IoT enters the equation. More specifically, the recent initiative to turn Chicago into one of the world’s smartest city could be a godsend for your parking needs. As we’ve outlined in a previous post,

If we had a way to predict where people would need and want to be in the near future, we could add living spaces as well as parking spaces in the places they will be needed most… With the right data and predictive systems, (we) would have the ability to relieve parking issues by adding parking solutions in the neighborhoods and other parts of cities that need them most.

Much like food-ordering refrigerators, this scenario is not necessarily science fiction anymore. Already, the Internet of Things is reducing parking woes in the city of Chicago. Rather than having to rely on intuition and past knowledge in finding a parking spot, apps like ParqEx can provide you with real-time updates on vacancies to minimize the time it takes to search for a spot.

As far back as 2012, experts on the subject predicted that the Internet of Things might find its most beneficial application in solving the parking problems for many of America’s downtown areas. As no less than 30% of all drivers in downtown areas are simply looking for parking, imagine the benefits of a solution that gets drivers off the street, reducing both pollution and traffic congestion at the same time.

The most frustrating part of that statistic may be the fact that these parking spots are actually available. Drivers just don’t know how to find them, leaving their owners without revenue and the cars on the street.

The key to success in changing that problem consists of two variables: visibility and timeliness. Parking situations can change in a second, meaning that any potential solution has to communicate availability instantly and reliably. That, in addition to a platform that allows parking spot owners to share their vacancies and drivers to find them, is crucial to reducing the number of people simply looking for parking spots.

Turning Chicago into a Smart City, in this case, will also improve the automated efficiency with which anyone looking to go downtown can look for (and find) a parking spot where they need it, and without paying a fortune. In other words, this Smart City Initiative will have benefits for literally anyone entering or driving around the city with a car.

And that’s why we’re so excited about the Array of Things currently transforming the city of Chicago. Executed correctly, it will not just improve the efficiency with which our local government can manage the city, but also improve livability for each of its residents. To learn more about our contributions to that cause, and how ParqEx is using the Internet of Things to improve your ability to find a parking spot, contact us.