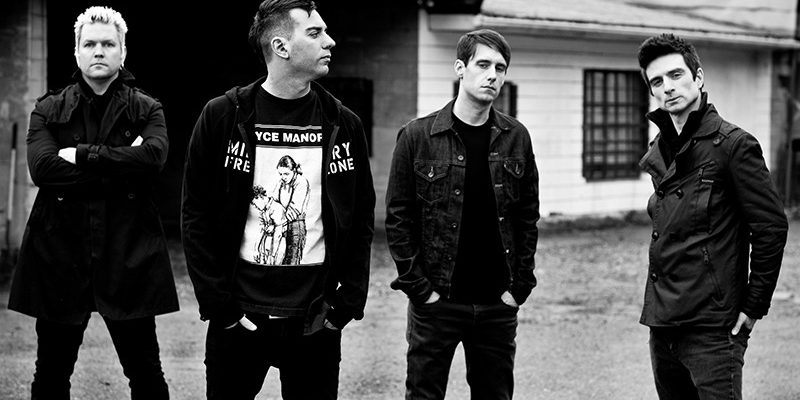 Music by Anti-Flag bestows a voice upon the voiceless. It provides a mouthpiece for the unheard to be heard. It amplifies the cries of the downtrodden in the face of oppression and tyranny. It’s the last line of dissent….

“Dissent is the highest form of patriotism.” – Howard Zinn

Since unleashing their seminal 1996 debut Die for the Government, Anti-Flag has empowered and emboldened the listeners of two generations beset with a new millennium stricken by war, racial upheaval, and financial collapse. The Pittsburgh, PA quartet—Justin Sane [vocals], Chris#2 [bass, vocals], Chris Head [guitar, vocals], and Pat Thetic [drums]—has consistently embodied a timeless punk spirit over the course of nine influential offerings, including The Terror State, For Blood and Empire, and most recently, 2015’s American Spring. The latter boasted appearances from icons such as Tom Morello and Tim Armstrong and yielded the anthem “Brandenburg Gate,” which cracked 1.3 million Spotify streams and counting.

They’ve incinerated stages on tour alongside Rage Against The Machine, Sick of It All, Billy Talent, The Offspring, Rancid, and more in addition to festivals ranging from Coachella to the Vans Warped Tour. A cultural institution, they have spoken out on behalf of movements such as Occupy Together, Greenpeace, Sea Shepherd, and Amnesty International between launching their own label A-F and ANTIFest.

As the world changed again with the controversial 2016 presidential election, the time felt ripe for Anti-Flag’s tenth and most definitive offering yet, American Fall [Spinefarm Records].

“There’s a focus on politics right now for obvious reasons,” says Chris#2. “When that happens, our band gets more attention. Being our tenth record, we wanted to make sure that we were true to ourselves. It had to sound like Anti-Flag. At the same time, London Calling is my favorite by The Clash because they took risks. Since they were in front of more eyes than ever, they didn’t play it safe. We wanted to push the envelope so we had a reason to put out another record when everyone was watching.”

Writing back home in Pittsburgh, the signature sound naturally evolved with slower grooves, tighter songcraft, thicker guitars, and bigger melodies. It provided the perfect musical counterpoint to the incendiary and inflammatory subject matter.

“Because we’re living in very divisive and dark times, we wanted to deliver our message in a way that wasn’t overbearing and oppressive to listeners,” adds Justin. “Getting a little more melodic makes the pill easier to digest. It became more impactful and simple.”

“Any fool can make something complicated. It takes a genius to make it simple.” – Woody Guthrie

Kicking off 2017, the boys traded snowy Pittsburgh in January for sunny Southern California where they would co-produce American Fall with Good Charlotte’s Benji Madden. His personal perspective proved indispensable in the studio.
“He understands that we know how to do this, but he also added a fresh take,” Chris#2 goes on. “It was cool to have him around on these songs, because many of them are structurally and sonically pretty catchy punk rock. We embraced the idea of writing singalongs and big hooks. We were all on a similar page going into this.”
“He had a great sense for feeling where something was heading and pushing it in that direction,” adds Justin. “That was a really impressive skill that he brought to the process.”

“We were definitely interested in talking about the politics of distraction on that one,” Justin exclaims. “The politics of distraction lead people to make choices that aren’t in their best interest. They follow leaders who are just using them and don’t care to actually do something positive for the country. When you live in a society that glorifies guns, drugs, and war, you become susceptible to those politics—while the individuals in charge are only worried about re-election. They don’t care about you.”

“Sooner or later, the people of this country are going to find out the government doesn’t give a fuck about them. Government doesn’t care about you. All they are interested in, is keeping and expanding their own power.” – George Carlin

Elsewhere on the record, “The Criminals” gallops ahead at full speed driven by a performance soaked in blood, sweat, and tears and pure punk fury. The acoustic guitar and chant of “When The Wall Falls” gives way to a buoyant groove, and “Casualty” caps everything off with a fitting middle finger, proclaiming “Try to shut us down, but we won’t be another casualty.”

American Fall heralds another era for Anti-Flag as their impact remains as palpable as ever.
“We were on Warped Tour THIS summer,” recalls Pat. “Three-to-five trans folks would come to the booth and say hello to us every day. These same marginalized kids were at the shows 20 years ago, but they were afraid to express themselves. The fact that they are NOW empowered to be who they really are is incredible…the fact that they know they are welcomed by our band and community is awesome, the same goes for so many others who are feeling alienated and they are receiving that message loud and clear.”

In the end, American Fall does what Anti-Flag has always done—it inspires change.

“I want everybody to realize they’re not alone,” Chris#2 leaves off. “These conversations we’re having are ones that others are having too. Four kids from Pittsburgh don’t have all the answers, but we’re looking out the same window and realizing that the color and the shape of things isn’t what we want. However, we can band together with some likeminded individuals who feel the same way and turn it into the thing we want.”