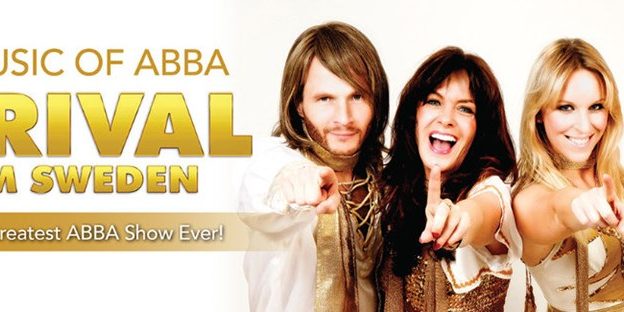 ARRIVAL – The Music of ABBA

ARRIVAL – The Music of ABBA

The world’s greatest ABBA show with sold-out shows all over the world. Show performances in more than 50 countries since 1995 and 25 sold-out tours in the USA since 2005.

This is the most authentic ABBA show ever, delivered in exact replicas of ABBA:s famous staging clothes exclusively approved by ABBA:s clothing designer.

ARRIVAL from Sweden performs together with some of the finest symphony orchestras in the world and also with ABBA original musicians.

ARRIVAL from Sweden is the only ABBA tribute band in the world that has been given an unreleased ABBA song, “Just A Notion” directly from Björn Ulvaeus and Benny Andersson of ABBA.

Abba was a Swedish pop group, formed in Stockholm in 1972 by Agnetha Fältskog, Björn Ulvaeus, Benny Andersson, and Anni-Frid Lyngstad: the group name derives from the first letter in each of their names. They became one of the most commercially successful acts in the history of popular music, topping the charts worldwide from 1974 to 1982. ABBA won the Eurovision Song Contest 1974 at The Dome in Brighton, UK, giving Sweden its first triumph in the contest. They are the most successful group to have taken part in the competition.

ABBA is estimated to have sold 340 to over 500 million records, making them one of the best-selling music artists of all time. They are also the best-selling band from continental Europe and from outside the English-speaking world. ABBA was the first group from a non-English-speaking country to achieve consistent success in the charts of English-speaking countries, including the United Kingdom, Ireland, Canada, Australia, New Zealand, South Africa, and the United States. They have a joint record eight consecutive number-one albums in the UK. The group also enjoyed significant success in Latin America and recorded a collection of their hit songs in Spanish.

During the band’s active years, the band was composed of two married couples: Fältskog and Ulvaeus, and Lyngstad and Andersson were married. At the height of their popularity, the band suffered strain which resulted in the collapse of both marriages. These relationship changes were reflected in the group’s music, with later compositions featuring more introspective and dark lyrics.

After ABBA disbanded in December 1982, Andersson and Ulvaeus achieved success writing music for the stage, while Lyngstad and Fältskog pursued solo careers with mixed success. ABBA’s music declined in popularity until the purchase of ABBA’s catalog and record company Polar by Polygram in 1989 enabled the groundwork to be laid for an international re-issue of all their original material and a new Greatest Hits (ABBA Gold) collection in September 1992, which became a worldwide bestseller. Several films, notably Muriel’s Wedding (1994) and The Adventures of Priscilla, Queen of the Desert (1994), further revived interest in the group and spawned several tribute bands. In 1999, ABBA’s music was adapted into the successful musical Mamma Mia! that toured worldwide. A film of the same name, released in 2008, became the highest-grossing film in the United Kingdom that year.