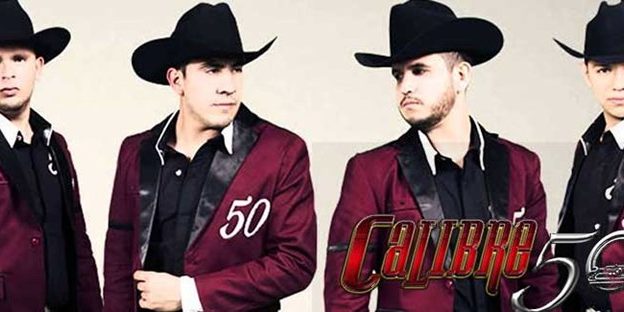 Calibre 50, from Mazatlan, Sinaloa, are a charting, award-winning quartet founded in 2010 by Eden Muñoz (vocals, accordion), Armando Ramos (guitars, vocals), Martín López (tuba), and Augusto(drums). Their provocative name (“armor-piercing bullet”) was chosen as a symbol for their music, which they hoped would penetrate geographical lines, from Mexico and the United States to Latin America.

After playing gigs wherever they could — from backyard parties to small restaurants — they made a video of their song “The Infiernito,” which brought them to the attention of Disa and landed them a recording contract. They made their full-length album debut with Renovar o Morir in 2010. The album included the singles “Callejero y Mujeriego,” “Culiacán vs. Mazatlán” (a duet with Gerardo Ortiz), and “El Tierno Se Fue.” As Calibre 50 began to receive airplay and gain attention on YouTube, they set the stage for their 2011 breakout album, De Sinaloa Para el Mundo, which included the hit singles “El Tierno Se Fue” and “Te Estoy Engañando con Otra.”

Calibre 50 kept to a rigorous touring schedule and never stopped recording. Released in 2012, El Buen Ejemplodelivered no less than four hit singles: “Mujer de Todos, Mujer de Nadie,” “Bohemio Loco,” “El Buen Ejemplo,” and “Gente Batallosa.” A duet with the band Carnivale, “Gente Batallosa,” became the most played song of the year in Mexico and netted the band a Billboard Award for Song of the Year Vocal Collaboration. Calibre 50’s work ethic was as inspiring as it was exhausting. They issued La Recompensain February of 2013. Its first single, “Aquí Estoy,” hit the top of the Regional Mexican Music airplay charts in both Mexico and the United States, followed in similar fashion by “Ni Que Estuvieras Tan Buena,” which was also radio’s most played song in the genre that year. Calibre 50 struck again in October with Corridos de Alto Calibre. This collection featured the single “El Immigrante,” which not only topped the radio charts, but remained in the number one spot for over ten weeks in Mexico. The intense pace of the road and the creative pressure in writing and recording resulted in personnel changes for the band in 2014. Lopez and Augusto were replaced by Alejandro Gaxiola on tuba and Erick Garcia on drums for that year’s Contigo album. It not only netted the band a number one spot for the title track single, but its full-length also claimed dominant spots.