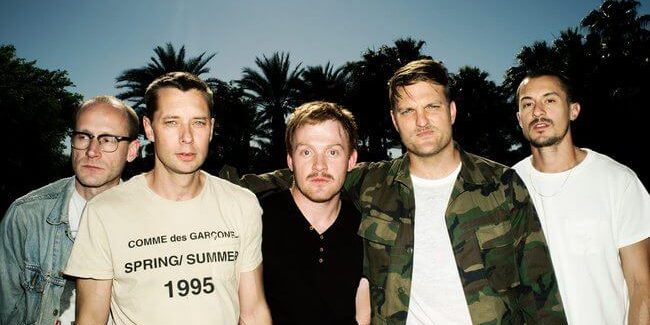 Ten years have come and gone since Cold War Kids first took to the stage in their homegrown Southern California scene. Time is typically unkind to indie rock bands. So how is that Cold War Kids are still here in 2014, selling out tours and releasing their fifth album in a decade amidst these 40 seasons of torrential fate winds, while so many of their peers have vanished?

“We worked really fucking hard, that’s the answer,” says Nathan Willett. “We worked really hard and we were successful, which is freakishly impossible, and we should embrace it. That’s our story.”

From his post at the front, Willett—along with the band’s bassist and visual director Matt Maust—has led Cold War Kids through the tricky 21st century rock and roll landscape, soaring over the peaks and facing the valleys head-on while carving out a place of the band’s own. Reaping sky-high praise from a mid-2000s blogosphere then growing wings as a live show juggernaut, they stand now with their fifth studio album Hold My Home as both a different animal and an unaltered beast all at once.

The band wrote and recorded the album in their own San Pedro studio, with guitarist Dann Gallucci and Dear Miss Lonelyhearts collaborator Lars Stalfors at the production helm. It is at the same time a more pure and also more bombastic album than anything they have ever made, utilizing their environment, experience, energy and cohesion while still driving home the familiar Cold War Kids sound that has been honed and perfected over this past decade. “This record is a testament to some of my strengths—loving words and stories—but also getting out the other side and creating a fun song that is in the spirit of the band,” says Willett. “This fifth record is probably the most simple, in a way, since the first one.”

Cold War Kids began as a four-piece of college friends but has undergone a couple of lineup changes in the past few years, from the fulltime addition of guitarist/producer Gallucci (Modest Mouse, Murder City Devils) to the departure of two original members, including most recently drummer Matt Aveiro. Replacing Aveiro on the album and on tour is seasoned veteran Joe Plummer (The Shins, Modest Mouse, Mister Heavenly), and also onboard is touring keyboardist/vocalist Matthew Schwartz. Willett admits the alterations, while not easy, have been for the best. “For a band getting past that several-year hump, everyone figures out their role or contributions and are either content or not. The idea of what we’re doing evolved. It was the right kind of work for Maust and for me. We’re on the same tip that way; we want to live this artistic life.”

By now, it’s clear that Cold War Kids starts and ends with Willett, Maust and Gallucci, the creative yin and yang and three-chambered heart of the band. Willett stars as reluctant leader, like Moses in the wilderness, the cerebral center and refined song-crafter, shouldering responsibility; Maust is the spontaneous punk rock locomotive, constantly pushing the group forward as the conducting engine of their artistic spirit; Gallucci, who worked for Cold War Kids doing live sound for three years before officially joining, has the wide experience, taste and encyclopedic knowledge of music to make it all click. (“No one knows the sound of this band better than Dann,” says Willett. “He’s opened many doors for us.”) Together, they are the perfect complement; to wit, when Willett and Maust formed the side-project French Style Furs last year, that experiment only brought more energy and ideas to Cold War Kids.

“French Style Furs showed us how fun it needs to be making a record,” says Willett. “And that sometimes you have to tear something off to create a new energy.”

The rounding out of their main project’s lineup has created a dream team of sorts, hitting on all cylinders. As Willett says, “We have everything we need: hunger, energy, guys that come from bigger bands who know how things should work… There’s a lot of space for these guys as musicians to be creative, but we have our musical common ground in that we’re serving the song. As Maust understands about art, you elevate it to a place where it’s bigger than you and you serve it.”

The one-two elevated punch that launches Hold My Home is undoubtedly the band’s strongest leadoff since Robbers & Cowards. “All This Could Be Yours,” the first single, packs influences from Patti Smith and Them with its chugging piano chords and sing-along refrain, while the second song, “First,” is perhaps their biggest sound yet. One of the final songs to be completed and originally intended as a B-side, Willett calls “First” a “morning-after song with the usual Cold War Kids self-doubt: ‘Who am I, what am I doing, who are these people, do they love me, do I love myself?’ The songs that strike a nerve emotionally are the vulnerable ones. But it got an immediate reaction. I want to still learn what roads I can go down that are working.”

“Hotel Anywhere” is an escape from expectations and responsibility, a song inspired by an energetic experience listening to Oasis in the van after a gig. “There was this sense of abandon,” says Willett, “and I realized that’s what we feed off of as a band, that kind of energy that’s not cerebral. I feed off of Leonard Cohen but I feed off a good rocker, too. ‘Hotel Anywhere’ has a space and time and it’s poetic, but it has some Oasis drunken pub fun.”

“Harold Bloom” is an introspective number named after one of literature’s foremost critics and inspired in part by a confrontational moment in a John Lennon documentary. A torch song of sorts, it toes the line of the artist’s obligation to let go, regardless of who may be watching closely, while cautioning to not “lift your heroes up so high/that you can’t touch.” “You cannot let the potential for criticism come before your own creative release,” says Willett. “You have to make mistakes, and run forward knowing you may trip. Powerful art often happens accidentally and I have to work to make myself that way. I understand the dynamic of needing criticism or self-awareness but I am reminding myself to be childlike about it.”

In that sense, Willett and Cold War Kids have circled back to the beginning, as self-sufficient artists creating for the sheer love and joy of creation, surviving and thriving as they go, running off of the same steam they started on. Picking up some essentials along the way, they remain, ultimately, themselves—exemplified by the title track. “It’s about battening down the hatches when trouble comes and seeking control in a chaotic world,” says Willett. “To ‘hold my home/where the seasons never change.’

“We come from that time of bands that either don’t exist anymore or do in some smaller form. We’re somewhere in this middle ground, which is really great because we still get to do exactly what we want. In that way it does come back to Maust and me. We’ve existed 10 years and five records, we’re still making art that is very vulnerable and singular but we are ambitious and honest with ourselves, knowing that we want success and to reach people and have them understand our art. There’s something great that comes from having to knock on doors, and some of that hunger is back in this record. That’s where depth comes from, when you can tap into that place that has you digging deep and trying to find something true. I think Hold My Home is about all those things.”