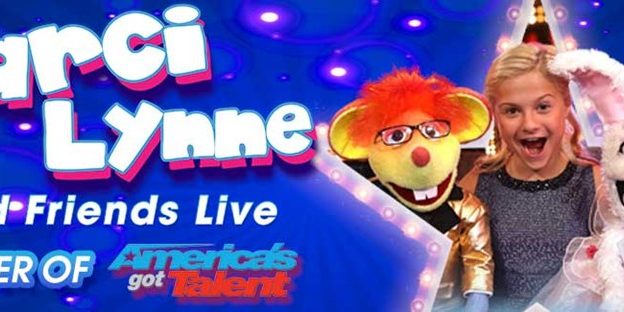 Darci Lynne and Friends Live captured our hearts as the winner of AMERICA’S GOT TALENT. Now see the magic live –DARCI LYNNE and her puppet friends in their debut tour February 11 at the Rosemont Theatre.

Coming off her record-breaking finale performance of AMERICA’S GOT TALENT, the 13-year old Oklahoma native will bring her jaw-dropping talent, hilarious puppets, and vibrant personality to the Rosemont Theatre!

According to AMERICA’S GOT TALENT, Darci Lynne first appeared on AGT as a shy 12 year-old who used ventriloquism to overcome her stage fright but stunned the crowd with a surprising singing act.

Farmer’s success on America’s Got Talent has been credited with helping to bring ventriloquism back to the general public’s attention.

Bill King of BuddyTV described Farmer’s final America’s Got Talent performance as “so seamless you need to be reminded of its difficulty”. Talking to USA Today, Terry Fator said of Farmer that “she is, at 12 years old, one of the most unbelievable, perfect ventriloquists I’ve ever seen, and she’ll only get better”, and later called her “one of the most talented human beings on the planet” in an interview with Billboard. Professional ventriloquist Sammy King said in an interview with The Fountain Hills Times that “she is very gifted, a great singer and has tremendous comedic timing”, while Jay Johnson described her on his personal blog as “a wonderfully talented girl” with “near perfect” ventriloquism technique who will “influence a generation of belly talkers to come”.