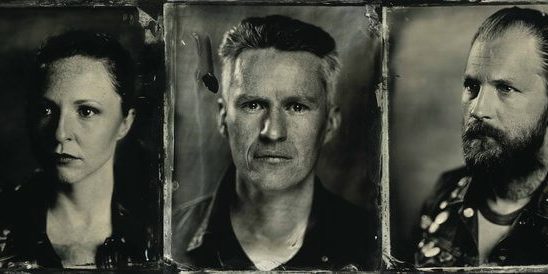 Before the revivals and the festival movement of the 60s and 70s and even before 78 RPM records and live rural radio, American folk music just was – unnamed, unstudied and unaware of itself except as it was happening in shacks, houses, tents and churches. It wasn’t a genre but an organic human response to work and worship in the American South before electrification, when the air was stifling and the living was borderline feudal. But only in such a fiery furnace could something as immutable, hard and heavy as American blues and gospel be forged in the first place.

Not many bands in the current Americana landscape continue to work this hand-hammered source material and channel the primeval, cathartic origins of roots music with as much pride and power as The Devil Makes Three. This shared ideal brought Pete Bernhard, Cooper McBean and Lucia Turino together almost 15 years ago, and they’ve remained steadfastly together and true to their vision over a staggering number of miles and gigs. They’ve been simplistically tagged as everything from punk to bluegrass to rockabilly, but one sweaty show will dispel and clarify;They know their tradition, but really what they do is throw down.

All that said, The Devil Makes Three has never relied on old material as its muse. They’re a fine songwriting band, led by Pete Bernhard, whose rough and real tunes feels old and new at the same time. Now, however, after four studio albums and a couple of energetic live recordings, a long simmering idea has come to pass. Redemption & Ruin is a concept project of 12 hand-picked songs that bring fans in on the repertoire and legacy that have inspired The Devil Makes Three since before they even founded the band.

“We’ve been kicking this idea around for a long time,” says guitarist and banjo player Cooper. Bassist Lucia adds: “I see it as introducing our fans to the music that influences us. I’m hoping that by listening to this record, people will go back and dig and find the originals.”

It’s also a showcase for the band’s collaborative spirit and their duly earned musical connections, featuring guest appearances by roots music icons Emmylou Harris, Tim O’Brien, Jerry Douglas, Darrell Scott and guitar great Duane Eddy. The group long ago began supplementing their trio format with fiddle, drums and other instruments, and this album is a natural extension of that. The sessions in Nashville at producer Dave Ferguson’s Butcher Shoppe studio (home base for John Prine’s creative work) were the most satisfying and enriching of the The Devil Makes Three’s career.

“We didn’t write these songs,” says Bernhard, “So they’re up for interpretation, and really that’s the best approach to take anyway. If you invite someone to play on your album you obviously like them and trust what they do. So arrangements changed drastically. Most of the arrangements we went in there with were not the ones that we came out with. And that’s exactly what we were hoping for.”

Jerry Douglas lends his icy lap steel to the album’s opener “Drunken Hearted Man,” a lesser known track by Mississippi blues ghost Robert Johnson. Though it kicks off the “Ruin” side of the album, it swings like a jug band in full revelry, while the lyrics depict something much bleaker. Getting high and getting drunk are celebrated more unambiguously in party songs by Muddy Waters, Willie Nelson and Tampa Red. To wrap the Ruin side, Townes Van Zandt’s “Waiting Around To Die” gets a moody treatment, floating on Mickey Raphael’s swelling and droning harmonica.

The “Redemption” side opens with a version of “They’ll Be A Jubilee” inspired by The Sunset Jubilee Singers’ interpretation, a ditty about the boys coming home is clothed in choir robes and delivered as bouncy gospel. Old Crow Medicine Show fiddler Chance McCoy matches with clawhammer banjo and snapping acoustic bass to give “I Am The Man Thomas” fantastic propulsion and mountain drive, while Pete sings lyrics of old school, bloody Jesus in a chapped, chilling voice. After a surprisingly rollicking take on Tom Waits’ “Come On Up To The House” with barrelhouse piano, the group heads deep into proto-bluegrass territory with a version of “What Would You Give In Exchange For Your Soul” that would bring a tear to the eye of a first generation Monroe Brothers fan. The side ends with distilled mournfulness – a vivid, subtle string arrangement over the Hank Williams lament “Angel of Death”, Dan Dugmore’s minimalist steel shedding tears and baritone electric guitar twangs lower than a sweet chariot.

While Redemption & Ruin is the first time TDM3 has explicitly turned to the historic catalog that’s been their musical education, it’s far from the first time they’ve sung for fun about being drunk, down and dissolute. It all began with the middle school friendship of Pete and Cooper in Brattleboro, Vermont. While their classmates and friends built a musical world around hair metal and pop, they were the class freaks who geeked out on pre-War blues and jug band music. “It was definitely not a very cool thing to like at the time,” says Pete. “Now we’ve done it for long enough that a lot of other people are into it.” Adds Cooper: “The rest of the world just came around!”

They were friends with Lucia Turino in high school but the band came together only after the three of them had migrated to the West Coast. Pete and Cooper were touring as a duo out of Olympia, Washington when they got stranded in Lucia’s college town of Santa Cruz, California. She volunteered to learn to play the bass to help them out, and while she thought she was signing on for some fun local gigs, the trio went on tour and hardly paused for years. In a coincidence of timing, the O Brother, Where Art Thou? soundtrack hit the mainstream just about that time, and while the artists were going to play old time music with or without a media moment, the film’s revival of pre-War Americana helped stoke some interest and inspired the band’s name. (The phrase comes from the siren song “Go To Sleep Little Baby” in the film.)

Original songwriting and a spirit of missionary zeal for early Americana helped propel The Devil Makes Three through nearly a decade of gigs big and small, successful and lonesome. They played rock venues and cultivated the atmosphere of a juke joint party or a wee hours porch jam. Dancing was always encouraged and some of Santa Cruz history and punk spirit pervaded their proudly raw presentation. They made acclaimed albums featuring infectious songs like “Old Number Seven” and “Graveyard,” and they assembled a coalition of indie rock and folk music fans. Eventually they landed premium festival bookings that bridged the divide, including Hardly Strictly Bluegrass, Hangout Fest, Shaky Knees and two Bonnaroo appearances.

The final piece of the puzzle fell into place as TDM3 discovered an approach to recording that helped their execution catch up with their expectations. “We used to go in the studio and multi-track (in isolated rooms), and we were never satisfied.” says Pete. “But on the past three records we learned that the best thing to do is just to record live, all in one room. It’s basically the Sun Records approach. And now we actually like going in the studio. We used to hate it.”

That ethos helped them connect with Nashville mastermind Buddy Miller for their 2013 project I’m A Stranger Here, which was praised for “a loose-limbed vibrancy that mimics the intensity of their live shows,” according to the Boston Globe. When the time came to cut the covers on Redemption & Ruin, the comfort level of working with Cowboy Jack Clement and Johnny Cash colleague David Ferguson in an open room with well placed microphones helped the recordings convey immediacy and authentic lust for getting the emotion and tone just right.

The Devil Makes Three has been ahead of its time, playing stomping folk before it started trending. And no matter how large the diaspora of old-time and early roots influence in America grows, we can count on the trio not to sanitize its source material or purge the suffering or the deviance or the repentance from the stories they sing. “That’s what we think the best stuff is,” Pete says. “And it belongs there. To take it out is to destroy it.”