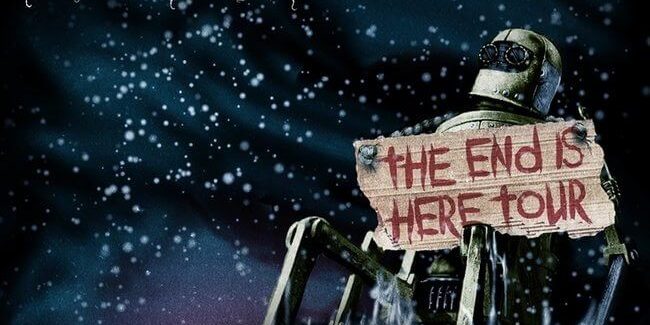 Falling In Reverse has managed the unthinkable. Already blessed with a Top 20 debut album, fervently passionate fans and positioned firmly atop the world of the Vans Warped Tour and the fast-moving social media landscape, Alternative Press magazine’s 2012 “Artist of the Year” could have rested on their victorious accomplishments — not the least of which is the cinematically gigantic redemption story surrounding the band’s vibrant lead singer and founder, Ronnie Radke.

But what have they chosen as an encore? Nothing less than to conquer the world.

After two years worth of touring, over 20 million YouTube views thanks to songs like “I’m Not a Vampire” and “Good Girls Bad Guys” (including one Revolver put in the Top 10 of the year), Falling In Reverse is going after the brass ring, the golden chalice, the hearts and minds of everyone with the unstoppable Fashionably Late.

The swagger of the hair-sprayed 1980’s Sunset Strip, the bravado of the most battle-hardened rhyme-slingers, the take-no-prisoners bottom end of the brutal tattooed metalcore crowd and the boundless ship-full-of-pirates revelry of underground parties and EDM have all beautifully converged in this one band and this new album. It’s for everyone on Instagram, on Twitter, or anyone with a brain and two ears.

“My dad raised me on metal, but my first serious love was hip-hop,” Ronnie explains. “When I heard Dr. Dre’s The Chronic, that’ when I fell in love. I didn’t know what the hell they were talking about, the beats were intertwined, and it came inside of me and took me over. When we added hip-hop elements I was thinking, ‘Should I do this? This sounds crazy! Are people going to like this?’ Now I’ve never been so proud of something. The final product, Fashionably Late, is the best work I’ve ever done.”

Falling In Reverse’s new music elicits vivid memories and visceral feelings that can only be summoned by warmly familiar elements from all that the best of the music world has offered before, while sounding impossibly fresh, like nothing ever released until now. Fashionably Late is exactly right on time, demonstratively declaring Falling In Reverse’s supreme understanding and mastery of modern times and poised for a breakthrough into the pop culture stratosphere. Falling In Reverse have hit upon a brilliantly contemporary zeitgeist, pouring their every artistic whim and fantasy into new songs born decisively from the iPod “shuffle” generation.

Ronnie Radke’s vocal performance remains as brash, brazen, self-revelatory and combative as on The Drug in Me is You, the Falling In Reverse album that emerged after the singer’s well-publicized troubles with drugs, the law and his former band. Ronnie’s story saw him grace multiple magazine covers, nominated as “Hero of the Year” at the Kerrang! Awards (where the band won “Best International Newcomer” the year before) and named one of the 100 Greatest Living Rock Stars by Revolver.

His years of life experience and perspective are all over Fashionably Late, this time delivered in even faster rapid-fire succession and clever wordplay thanks to his full-blown embracing of the hip-hop styles he’s always fancied. Yes, Ronnie is rapping all over the new album. And there’s nothing “rap metal” or “rap-core” about it. It’s authentic, it’s credible and it’s on top of mind-melting catchy beats, all of which somehow works seamlessly with brutal breakdowns, throaty screams and the type of guitar shredding from Wunderkind Jackie Vincent that could make Eddie Van Halen blush. Radke and the English-born Vincent remain a dynamic duo in the style of Axl and Slash, of Mick and Keith, side-by-side as they embark on this awesomely ambitious creative adventure with rhythm guitarist Derek Jones, bassist Ron Ficarro and drummer Ryan Seaman, the lineup that gelled live over countless headlining tours and brief stints opening for the likes of Guns N’ Roses and Hollywood Undead.

The album kicks off with “Champion,” a firm reminder that Falling In Reverse has retained their mastery of metal. Taking cues from As I Lay Dying and Metallica as a foundation, with a hugely melodic chorus along the lines of ’80s hair-metal, plus a bridge that combines the rhyme style of Eminem with the music of Kanye West. The tongue-in-cheek “Bad Girls Club” is inspired by real events, turning the tables on the idea of guys as pickup artists and exposing the other side when girls sometimes prey upon dudes. “Rolling Stone” has another huge chorus and is another genre-hopping rollercoaster ride that ultimately sounds triumphant and shockingly engaging.

“Fashionably Late” is wrought with multiple meanings. On the one hand, the band has adopted more of a high-fashion look than when they first emerged. On the other hand, Radke feels like this is the type of song and album he should have made years ago, as far back as when he started writing after he made Dying is Your Latest Fashion as the frontman for Escape The Fate. “I get down to the science with words. Everything is always a play on words. I should have made this record before, but I went to prison for two years. Now it’s been another two years since the first album. I also like that Fashionably Late sounds timeless, iconic and absolutely modern.”

“Born to Lead” represents one of the many pinnacles of Falling In Reverse’s new sound, blending big radio beats with moshpit inducing riffage, all while addressing Ronnie’s critics head-on. “It’s everything I’ve ever wanted to say to all these Twitter followers that talk shit,” he says. “I wanted to shut-up everyone who says we can’t do metal. I wanted to let everyone that dedicates their lives to just one genre of music know why they are so unhappy. Some metalheads are really angry at other types of music. We stuck ‘Alone’ in the middle of the record with one of the greatest solos and breakdowns, just balls to the wall with it, so all the metalheads can get into it.”

From there, the album dives headfirst into one of its most adventurous moments, hitting upon the pulse of the past few generations raised on video games new and old with incredibly deft precision. “Game Over” is fueled by classic arcade sounds, with Ronnie singing, “Life is like a video game.” “We’re all trying to collect our ‘coins’ and impress the girl, or the ‘princess,’ by saving her,” he explains of the analogy. “There’s a lot of obstacles that we face. And we’re all trying not to die!”

“It’s Over When it’s Over” offers one last kiss-off to Radke’s former band, tempering the vicious bite of earlier songs like “Tragic Magic” with a newfound peace and contentment, as well as a sense of pride in Ronnie’s accomplishments with Falling In Reverse. “I didn’t want to be rude or mean on this record. I’m over all of that. I’m just saying, you can’t tell me I didn’t rise above and surpass them. All of the trials I went through, it’s pretty self-explanatory. Now I’m doing better. That’s it.”

“Self-Destruct Personality” is a nod to the first Falling In Reverse record and Escape The Fate’s debut, diving back into the family history Ronnie has detailed before, with a twist. “Daddy told me not to bite my tongue/ I hate my mother because she left me with no love/ so I bottled it up/swept it under the rug.” It’s acknowledging the past, while moving toward the future. “I throw a curveball by busting some rhymes in the bridge,” Ronnie says, laughing. “I love that song a lot, it’s crazy. So crazy!”

The first song Ronnie wrote for the album was “Fuck the Rest.” The recording features a background “Hey!” from his friend and tour manager Josh Stern, who sadly passed away. “His voice is immortalized in it,” Ronnie says. “It’s a good song that plays on my old style, too, because we had to keep that feeling. I wanted to pay homage to Josh, who was a really good friend of mine, by having it on the record.”

Fashionably Late closes with the direct, to-the-point and appropriately-titled “Keep Holding On.” The first verse is about Ronnie’s own troubles, the second from the perspective of kids who are bullied. It’s a celebratory anthem aimed at empowering kids who are suffering from intimidation to feel better, to persevere, to conquer. Who could be a more credible spokesman for conquering adversity than Ronnie Radke, who has triumphed again and again in recent years with Falling In Reverse?

Not many get to climb the mountain once, let alone twice. His first band’s first album brought him notoriety in the underground; Radke’s comeback with Falling In Reverse blew down the doors. And now, together with his close friends in his band, Ronnie Radke is about to climb new heights of achievement for a third time, stepping right into the eye of the post-modern/pop-cultural hurricane with all of his angst, humor, confidence, self-examination, wide smile and rad hairstyle intact.