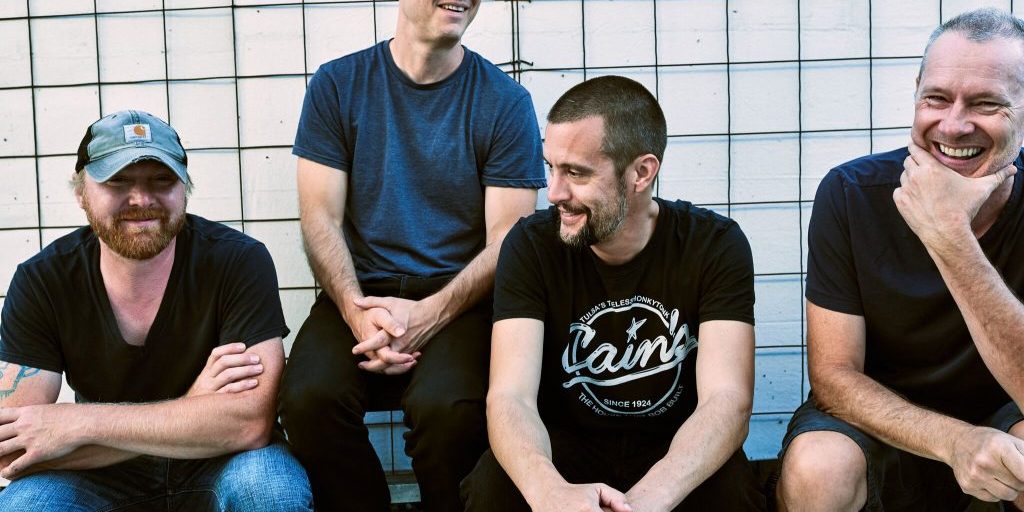 Helmet was formed in New York City in 1989 by founding members Page Hamilton, Henry Bogdan, Peter Mengede and John Stanier. The group signed to Amphetamine Reptile Records and released their first full-length album, Strap It On, in 1991. A year later, they signed to Interscope Records.

The band found mainstream success with their Interscope debut, Meantime, which debuted at number 68 on the Billboard 200 and spawned the hits “Unsung” and “In the Meantime.” In 1994, Helmet explored new sonic territories with the fan favorite and critically acclaimed Betty, which incorporated elements of jazz and blues into their “thinking man’s metal.” Following an additional album, Helmet broke up in 1998, while Hamilton explored other projects, including various collaborations and film scores.

In 2004, Hamilton reformed Helmet with a new lineup, releasing the album Size Matters that same year. In 2006, they released Monochrome on Warcone records and then released their most recent album, Seeing Eye Dog, via Work Song in 2010.

After a self-prescribed hiatus, 2012 saw PRONG blow the hinges off the door with the release of “Carved Into Stone”. Seemingly out of nowhere, Tommy Victor and company managed to combine all the previous elements of the band’s formula: thrash, hardcore, industrial metal, etc. with a new urgency and angst that struck a deep nerve with the band’s loyal fan-base and beyond.

The band marched onwards with 2014’s highly acclaimed “Ruining Lives” which spawned a number of instant classics. “Turnover”, “The Barriers” and the title track became staples in their live set when embarking on a bone breaking schedule of concerts around the world in support of the record. A video for “Remove, Separate Self” was released creating even more interest in this significant recording.

Recorded over the summer of 2014 and released in early 2015, PRONG’s cover album “Songs From The Black Hole” was loved by fans and critics alike. Always game to make the unexpected move, the album featured songs from artists as diverse as Hüsker Dü, The Bad Brains, Black Flag, The Sisters Of Mercy and Neil Young.

After yet another headline tour, it was straight back to the studio for another studio album. Just days after mixing was completed, PRONG went on the road with Danzig and SuperJoint Ritual in North America and released the first single “Ultimate Authority” on the day the tour began.

The album that followed, “X – No Absolutes”, was once again PRONG at their very best. The sheer intensity and ferocity of the albums opening triumvirate “Ultimate Authority”, “Sense Of Ease” and “Without Words” left the listener gasping for air. The album was once again followed by a massive world wide touring campaign, this time as special guest to Obituary and Exodus in Europe and to Testament and Sepultura in North America.

In between tours, Tommy Victor managed to write and record yet another album, his fourth album of all new works and his sixth recording project in as little as five years. Describing him as being at his most prolific is an understatement.

The new PRONG-Album “ZERO DAYS” is another monster of an album, another step towards refining the perfect PRONG-Sound and another album that lacks any filler or lacklustre moment.

Musically, it hits home from the first bars of the mighty opener “However It May End” to the last bars of the albums closing track “Wasting Of The Dawn”. Every track is it’s own emotional roller-coaster ride, chock-full of massive riffage, ironclad grooves and topped off by Victor’s ever-improving vocal delivery.

“ZERO DAYS” was once again produced by Tommy Victor, with trusted collaborator Chris Collier as co-producer and engineer.

“I must say a lot of effort was put into this new “Zero Days” recording. From the minute I would get off tour, I would consolidate ideas from the road and form new ones. Again the focus was on creating good songs. We wanted this record to be modern as well as holding justice to all the previous releases. Again and maybe even more than normally I went crazy meticulous with the lyrics. I had built up a lot to say and I wanted to articulate them in the most intelligent way possible.I firmly believe the mission was accomplished all around.

We are really pleased with the performances on this record, as well. It’s a solid outing. We have the anthems, the bangers, the thrashers, the grooves, everything that makes up a PRONG record. It’s definitely a record to listen to start to finish!!”