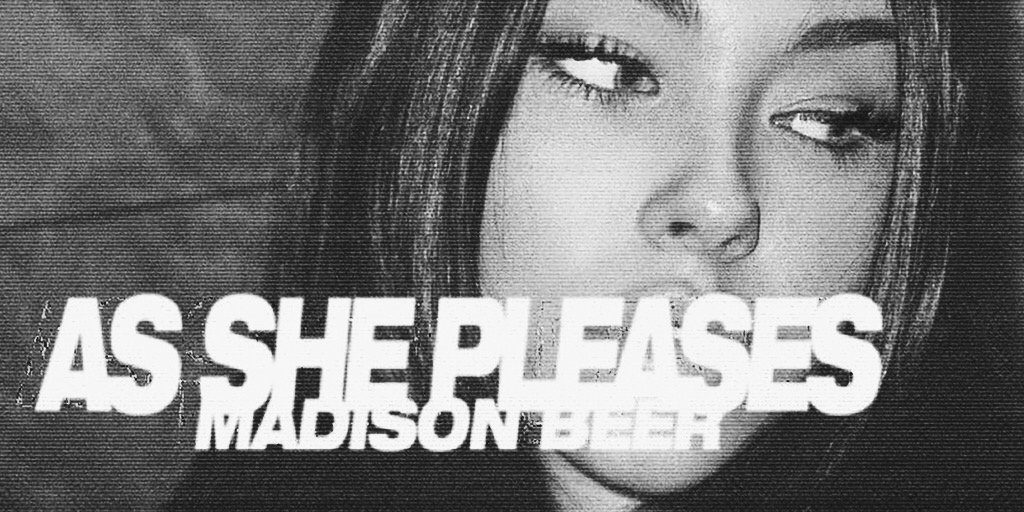 Over the past few years, Madison Beer has grown into herself as the world watched. For the Jericho, Long Island native, music is what propelled her into the spotlight after she started recording and posting cover songs to the web at the age of 12, striking a chord with the listening public and accruing a sturdy fan base that, today, has helped push her overall YouTube views past 83 million. But as her social media following swelled and she racked up millions of clicks and streams across various platforms, she finally reached a point where she felt comfortable releasing a project that sufficiently conveys the person she’s become.

“I wanted to just not hold back with anything and have it come through my heart and be all of me,” says Beer, now 18. For her debut EP As She Pleases, independently releasing February 2, 2018, she fully comes into her own as a musician, co-writing on the set’s seven tracks that blend the sheer pop sensibilities of her earlier work with hints of weathered blues, plucked acoustic balladry and hearty R&B. “I wanted it to be a true representation of me and the things I like—there are a lot of aspects that are really true to me and who I am.”

As She Pleases plays as an embodiment of the teenage experience, from the pangs of adolescent attraction (“Teenager in Love,” inspired by 1950s artists like Dion and the Belmonts and Santo & Johnny) to being able to admit when a relationship has overstayed its welcome (“Fool”). For Beer, that meant mirroring the person she is on social media—she’s amassed 10.5 million Instagram subscribers and 2.6 million Twitter followers—in her music, and remaining as authentic as can be. For Beer, that began with the EP title, where she harnesses an ethos of self-empowerment in an effort to embolden her audience. “I wanted it to be As She Pleases, meaning you can do whatever you want when you put your mind to it,” she explains. “You don’t have to be scared of anything or do anything you don’t want to do.”

It also meant looking to her personal life for source material. “Tyler Durden,” a bare ballad where her fluttering vocals warm to an arpeggiating, plucked guitar, is inspired by her favorite movie Fight Club, its lyrics playing off of lines from the film, while the bopping “Home With You” rebuffs the advances of clueless guys when she’s out trying to have a good time. So far, a few of the EP’s songs have struck a chord: the electro-splotched “Dead” has racked up more than 41 million Spotify streams since release in August 2017 and got a boost with a remix from Cedric Gervais (Lana Del Rey’s “Summertime Sadness”), while “Say It to My Face,” produced by Grammy-nominated producer Fred Ball (Little Mix, Rihanna) sped to 1.5 million Spotify streams in its first week-and-a-half of release in Nov. 2017.

Releasing As She Pleases is the next logical step in Beer’s progression from YouTube singer to budding star. Growing up, music became an escape from the mundane of Long Island, where she realized she wanted to pursue her love of the art form when she was 10. By 12, she began posting to YouTube, and the following year, her soulful cover of Etta James’ “At Last” caught the attention of Justin Bieber, who tweeted out the clip on his Twitter page and helped sign her to Island Records. But after she was given opportunities like recording the theme song for Monster High and collaborating with Cody Simpson, she inevitably felt more comfortable on her own, and in the years that followed, she developed herself as an artist as authentically as possible.

Now, with As She Pleases, Beer is ready to show the world who she truly is and hopefully inspire a few listeners along the way. “I wanted to be a voice and wanted to have people look up to me like, ‘If Madison can do it, then I can do it,’” she says. “That’s something I’ve always been really interested in communicating. I hope that’s how it’s translated and that people listen to it the way that I’m trying to portray it.”