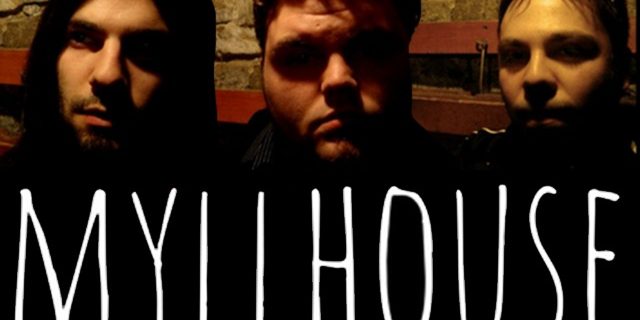 Dave is the singer/guitarist for myllhouse. Forming myllhouse is 1998 and joining forces with Mike and Richo in 2003 forming the final adaptation of the band. Mike plays bass for myllhouse. Joining the band in 2003 following a very funny experience he had playing DJ at a non-alcoholic biker gang’s club to keep them occupied while the band played a show at a community center in Wheaton, he was welcomed into myllhouse with open arms and has been a crucial part of the band ever since. Richo plays drums for the myllhouse. Joining myllhouse in 2003 as a well-tenured drummer in the Chicago local music scene, Richo has provided some of the most powerful and heartfelt drummings you will ever hear. Not to mention he is an actual ghostbuster.

TAKE THE REINS is a Chicago area rock band. In 2017, they recorded and released their debut album “Addiction by Subtraction”.
Called “an explosive mix of Joan Jett and The Pretenders”, frontwoman/vocalist Courtney Boyers & crew churn out 12 hard-hitting tracks exploring varying themes on addiction, despair, and defiance. Don’t miss out on this eclectic mix of songs that don’t let up, from start to end.

Founded in 2011, TAKE THE REINS is made off of members from local music greats – Mostly About Nothing & She Likes Todd, contributing to their distinctive sound.

The Glory Years is a Chicago based early 2000s era pop punk/rock cover band performing song by the likes of Yellowcard, New Found Glory, Blink 182, Fall Out Boy, Underoath, Thursday, Paramore, The Starting Line, Sum 41, All Time Low, Boys Like Girls, Anberlin, Story of the Year, and many more. Their high energy show and killer sound will cause all of the nostalgic feelings to come rushing back into your brain. Seriously, how are you not going to have an amazing time? Come share a beer and a memory of The Glory Years.