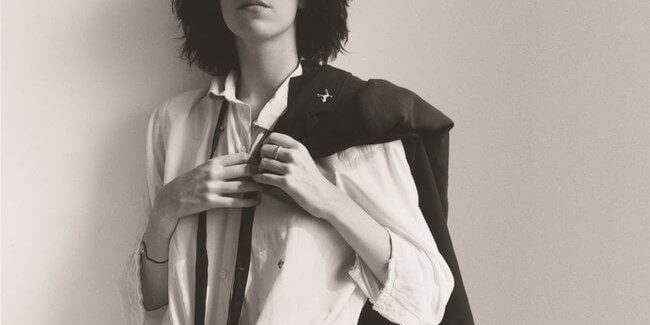 Patti Smith, born in Chicago and raised in South Jersey, migrated to New York in 1967.

In 1975 Patti Smith’s first recording, Horses, was inducted into the National Recording Registry in 2010 at The Library of Congress by the National Recording Preservation Board. Her subsequent albums are Radio Ethiopia, Easter, and Wave, Dream of Life, Gone Again, Peace and Noise, Gung Ho, trampin, Land, twelve, and most currently, Banga.

Author of the acclaimed memoir, Just Kids, which chronicled her friendship and journey in art with photographer Robert Mapplethorpe, Patti Smith was awarded the 2010 National Book Award. Her other books include Witt, Babel, Coral Sea, Woolgathering, and Auguries of Innocence.

Patti Smith’s art has been exhibited at galleries and museums worldwide. Represented by the Robert Miller Gallery in New York since 1978, her exhibitions include Strange Messenger, Land 250, and Camera Solo. Steven Sebring’s 2008 documentary, dream of life: the movie, was acknowledged internationally and received an Emmy nomination.

As well as a Rock and Roll Hall of Fame inductee, Patti Smith also holds the honor of “Commandeur des Arts et des Lettres from the French Ministry of Culture, and has been awarded honorary doctorates from Rowan State University, Pratt Institute of Art, and the School of Art Institute Chicago. Patti Smith was honored by ASCAP with the Founders Award, representing lifetime achievement, and the recipient of Sweden’s Polar Award that is an international acknowledgement for significant achievements in music.