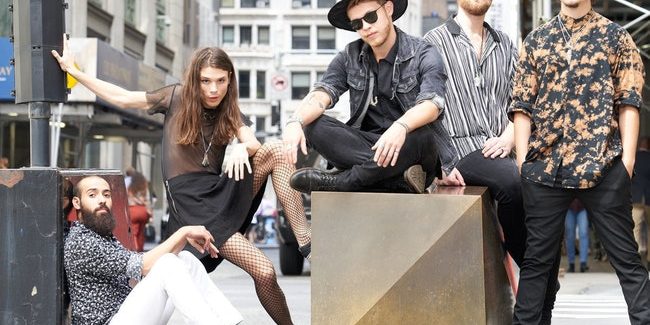 Hailing from the Blue Ridge Mountain college town of Boone, North Carolina, Rainbow Kitten Surprise play a mix of bright indie pop and earnest, harmony-driven folk-rock. Formed in an Appalachian State dorm room in 2013 by singer Sam Melo and guitarist Darrick “Bozzy” Keller, the duo recorded and self-released their acoustic EP, Mary, before recruiting additional members Ethan Goodpaster (guitar), Charlie Holt (bass), and Jess Haney (drums) to complete the lineup. The expansion resulted in the bigger, more energetic sound heard on their debut album, Seven, which was later repackaged with their EP in a release called Seven + Mary. Their self-titled second LP arrived in 2015 via hometown label Split Rail which, combined with the increasing viral success of their single “Devil Like Me” (from Seven), brought Rainbow Kitten Surprise to a much wider national audience. They appeared at festivals including Bonnaroo, Firefly, and Austin City Limits in 2017, and signed with Elektra Records for their third album. Recorded at Nashville’s Neon Cross Studio, where the group took advantage of a collection of vintage instruments, How To: Friend, Love, Freefall was produced by Jay Joyce (Cage the Elephant, the Head and the Heart) and released in 2018