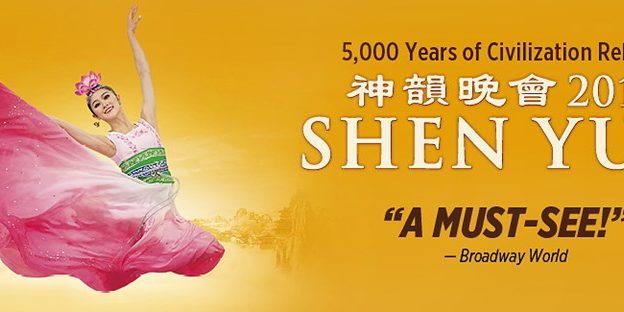 This epic production immerses you in stories reaching back to the most distant past. You’ll explore realms even beyond our visible world. Featuring one of the world’s oldest art forms— classical Chinese dance—along with patented scenographical eﬀects and all-original orchestral works, Shen Yun opens a portal to a civilization of enchanting beauty and enlightening wisdom.

Traditional Chinese culture—with its profoundly optimistic worldview and deep spiritual roots— was displaced by communism in China. Today, only the New York-based Shen Yun is keeping this precious heritage alive on stage. And it’s an experience that will take your breath away.

A performing arts and entertainment company formed in New York City. It performs classical Chinese dance, ethnic and folk dance, and story-based dance, with orchestral accompaniment and solo performers. The Shen Yun website translates the phrase as “the beauty of divine beings dancing”.

Shen Yun was founded in 2006 by practitioners of the Falun Gong spiritual discipline, with the mission of reviving “the essence of 5000 years of Chinese culture”, which it states to have been nearly destroyed by the Chinese Communist Party government. Performances around the world are hosted by local Falun Dafa Associations. The performance contains strong religious contents.

The group is composed of five performing arts companies: The New York Company, The Touring Company, The International Company, The North America Company, and The World Company, with of a total of about 200 performers. For seven months a year, Shen Yun Performing Arts tours to over 130 cities across Europe, North America, Oceania, and Asia. Shen Yun’s shows have been staged at New York City’s Lincoln Center for the Performing Arts, London’s Royal Festival Hall, Washington, D.C.’s Kennedy Center, Paris’ Palais des Congrès. The company has performed extensively in Taiwan but has yet to perform in Mainland China or Hong Kong. The show’s acts and production staff are trained at Shen Yun’s headquarters in Cuddebackville, in Orange County, New York.