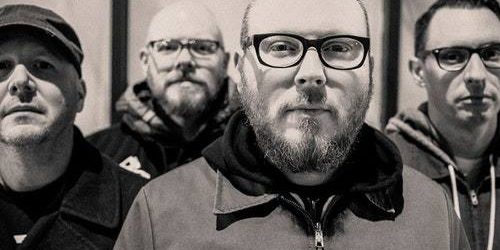 “Ever wonder what a traditional lounge singer would sound like backed up by a punk band? The Smoking Popes take that concept one step further: They’ve created a unique kind of music that some listeners are describing as ‘hyperkinetic tear-jerkers’.” Los Angeles Times

Bursting onto the Chicago punk scene in 1991, Smoking Popes built a relationship with their legion of fans by melding raw songs about bittersweet heartache with soaring melodies, power chords, and infectious energy. From their early indie releases to their critically acclaimed major label albums, Smoking Popes developed a unique blend of buzzsaw guitars, caffeinated rhythms, and heartfelt crooning vocals, combining the angst of punk with the smooth sophistication of Frank Sinatra, creating music both urgent and timeless, and influencing a generation of musicians in their wake.

These days, the Popes are tighter and more inspired than ever, having reunited with drummer Mike Felumlee, from the band’s seminal recordings of the ‘90s, to record their first new material with their original lineup since 1998, a powerful two-song single – “Simmer Down” and “Someday I’ll Smile Again” – now available on Asian Man Records. Lead singer Josh Caterer describes the reunion, “We’ve been fortunate to have some really great drummers over the years, they’ve all brought something unique to the band, but as soon as we started playing with Mike again, we felt like ‘This is how it’s supposed to be!’ Mike is the one who helped create our sound in the first place. Having him back in the band brings a lot of energy and excitement to what we’re doing.”

And that’s not their only reason to celebrate. 2017 marks the 20th anniversary of Destination Failure, the Popes’ pop-punk masterpiece, originally released on Capitol Records in 1997. To commemorate this milestone, they’re partnering with Side One Dummy Records to create a special vinyl edition of the album, due out in early 2018. Caterer remarked, “It’s sort of hard to believe that Destination Failure is twenty years old! Listening back to the album, it doesn’t feel dated to me. I think there’s an immediacy to the music that still comes through. A lot of that has to do with Jerry Finn. He was such a brilliant producer. We were very lucky to work with him.”

The band is also hard at work writing and arranging new material for a full-length album to be released in the fall of 2018. Look for some of those new songs to pop up in their live sets on the road this year. If their recent single is any indication, Smoking Popes are far from done making waves.

“Why are the Smoking Popes important? Because they’ve written your favorite song, whether you know it or not.” – Kyle Kinane, Comedian & Smoking Popes Superfan