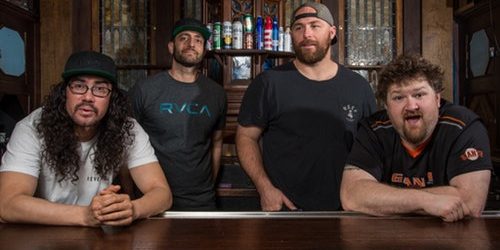 The Expendables enjoyed a laid-back lifestyle growing up in Santa Cruz, CA; surfing, skating, partying, and playing music were commonplace. Since 1997, The Expendables have staked their claim in the California surf/rock genre by headlining venues from coast to coast. Blending Reggae, Punk Rock, and 80s style dueling guitar solos, The Expendables have made heads turn and floors shake for years.
The band consists of four longtime friends: Geoff Weers (Guitar and Vocals), Adam Patterson (Drums and Vocals), Raul Bianchi (Lead Guitar) and Ryan DeMars (Bass). The first seven years of their career was fueled with three full-length, completely independent releases. No Time To Worry (2000), Open Container (2001), and Gettin’ Filthy (2004) would bring in a combined total of over 40,000 units sold with no physical distribution and no record label.
While touring and supporting their album, Gettin’ Filthy, The Expendables would share the stage with Slightly Stoopid and catch the attention of founders and front men Kyle McDonald and Miles Doughty. In 2007 Slightly Stoopid formed their own independent label, Stoopid Records, and signed The Expendables for the label’s first non-Stoopid release, which was The Expendables self-titled. Released in September 2007, the album would be accepted as an instant classic by fans and received rave reviews from critics.
The band continued supporting the album with hundreds of shows over the next two years, gaining fans around the world, and respect from the bands that influenced them. Early 2009 The Expendables toured relentlessly. Within a few short months, they hit the road with NOFX, Less Than Jake, Pennywise, and Pepper. In case that was not enough, The Expendables was honored to join 311 on their Summer Unity amphitheater tour, rocking huge stages, and opening new doors for the band.
The boys decided the idle time was not an option after the conclusion of their tour with 311, so they went straight into the studio to begin recording their next album, Prove It. Paul Leary (producer of Sublime, Slightly Stoopid, Pepper, Supersuckers, as well as a guitar player for Butthole Surfers) and El Hefe (guitar player of NoFX) would split producing duties at Big Fish Studios in Encinitas, California.
Prove It was released May 11th, 2010 debuting at #158 on the Billboard Top 200, #30 on Billboard’s Independent charts, and #4 on Billboard’s Heatseekers! The album also pushed to #15 on iTunes Top 200 and #5 on iTunes Alternative Charts, jumping The Expendables to a new level in their career. The band’s new release would include guest performances by C-Money, OG, and Dela of Slightly Stoopid throughout the album. Jumping into the mix as well would be longtime friend G. Love on the ballad “Wells”.
To support the release of Prove It, The Expendables continued their tenacious touring schedule with their popular yearly Winter Blackout Tour, a headlining Spring Tour, a slot supporting Slightly Stoopid and Steel Pulse on this summers, Cauzin’ Vapors tour and will be in Europe with The Mad Caddies during the fall. The band will close out the year with a national headlining run that will be sure to keep The Expendables strong hype building.
Thirteen years later, five albums down and countless miles covered The Expendables show no signs of slowing down.