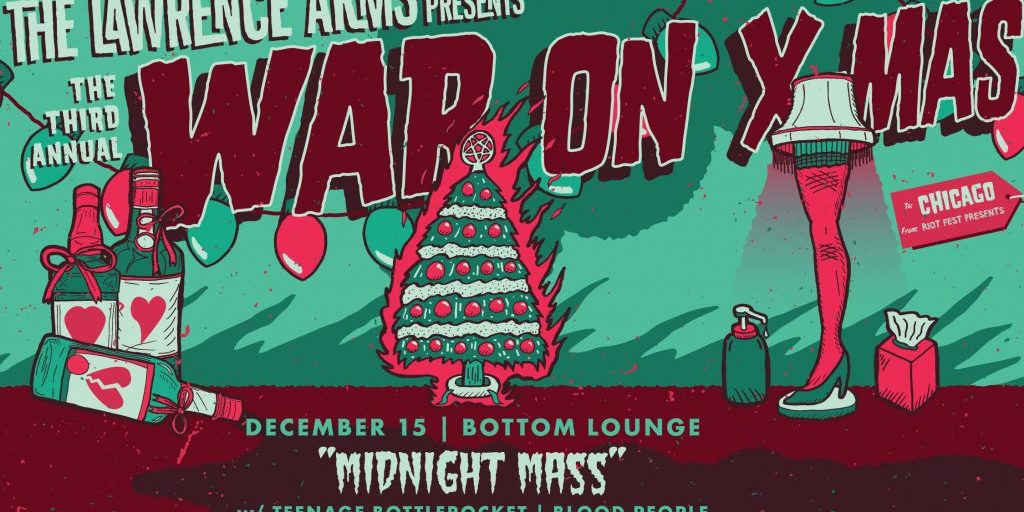 The Lawerence Arms 3rd Annual War on Christmas Chicago: The Lawrence Arms is an American punk rock band from Chicago, Illinois, formed in 1999 and currently recording for Fat Wreck Chords. They have released five full-length albums and toured extensively. Their music and lyrics juxtapose references from history and literature with American pop culture.

It seems hard to believe, but the boys in Teenage Bottlerocket aren’t boys anymore: They’ve been a band for more than 15 years, and have spread their pop-punk gospel across the world through a series of killer records like Total and They Came From The Shadows and an equally killer live show, one that is packed full of sing-alongs and circle pits. What’s really wild is that the whole thing all started thanks to a well-placed CD-R.

Hailing from the windy city of Chicago, Blood People are quickly making their mark in the music scene. Raw, grungy, sleazy, in-your-face, 90s but refreshing are just a few things this female-fronted heavy punk rock band have been described as. The band formed in January 2016, playing in clubs all over Chicago, Blood People were main support for legendary pop-punk band Shonen Knife and hometown heroes AM Taxi. Last One Standing has been featured on Chicago’s Q101 and 95.1 WIIL Rock.