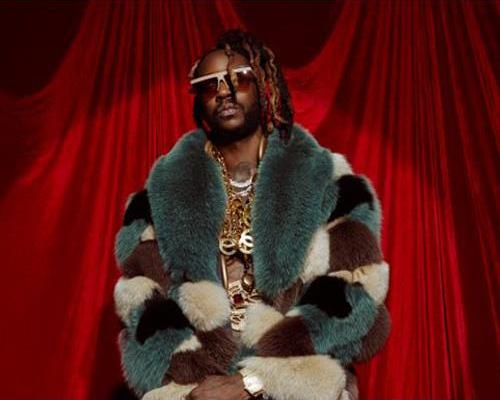 2 Chainz, the multi-platinum, Grammy Award®-winning MC, first made his mark when he broke out of his native Atlanta as a founding member of the duo Playaz Circle. Their rap-R&B-pop crossover hit “Duffle Bag Boy” featuring Lil’ Wayne, released on the DTP (Disturbing Tha Peace)/Def Jam label, sent shock waves across the hip-hop universe in 2007. Chainz’s solo career began that same year with the release of his first mixtape.

Proving that he could write street anthems with crossover appeal, Chainz capitalized on his notoriety with the back-to-back mixtapes Codeine Withdrawal (2010) and Codeine Cowboy (2011). His 2011 mixtape T.R.U. REALigion mined downloads in the millions. The outspoken rapper had established a new sphere of influence.

2 Chainz’s name was on everyone’s lips in 2012 when he stole a verse on “Mercy,” fellow Def Jam artist Kanye West’s RIAA triple-platinum #1 R&B/#1 Rap hit (from Cruel Summer). In August 2012, Chainz arrived as a Def Jam solo artist with Based On A T.R.U. The story, his Platinum debut album, entered the charts at #1. Its success was fueled by the platinum #1 “No Lie” featuring Drake, the double-platinum “Birthday Song” featuring Kanye West, and the double-platinum “I’m Different.” “Mercy” was subsequently a Grammy® nominee for Best Rap Song and Best Rap Performance, while B.O.A.T.S. was nominated for Best Rap Album. Chainz’s dominance was extended when the sequel, B.O.A.T.S. II: Me Time entered the hip-hop chart at #1 in September 2013 and spun off the gold single, “Feds Watching,” featuring Pharrell.

In 2016, Chainz brought it back to his essence with mixtapes that dominated the streets: Felt Like Cappin, Daniel Son, Necklace Don, and Hibachi For Lunch. Also, in 2016, he released the lauded collaborative album ColleGrove with New Orleans hip-hop luminary Lil Wayne. The year was capped off with his first Grammy Award, Best Rap Performance, for his verse on Chance The Rapper’s hit song “No Problem.”

With momentum on his side in 2017, Chainz released his first solo album in four years, the RIAA platinum #1 Pretty Girls Like Trap Music. The album netted over 2 billion streams, three consecutive multi-platinum hits, and was accompanied by a 35-city tour of North America.

2018 brought the EP releases The Play Don’t Care Who Makes It (February, with the RIAA gold “Proud” featuring YG and Offset, boasting over 100 million streams). Hot Wings Are A Girl’s Best Friend (November), a two-song bundle that included “Hot Wings” and “Girl’s Best Friend.” Finally, they pointed the way to the March 2019 release of Chainz’s fourth solo album, Rap Or Go To The League, described as his most personal, lyrical, and soulful record. It challenged the notion that the only way out of the inner city was to become a rapper or a ball player. Instead, the album flipped that trope, celebrating themes of black excellence, the power of education, and entrepreneurship. A&R’d by LeBron James, Rap Or Go spun off two smashes: the MTV VMA-nominated “Rule The World” featuring Ariana Grande (over 22 million YouTube views) and platinum “Bigger Than You” featuring Drake and Quavo (over 62 million combined YouTube views).

2 Chainz’s cultural impact continues to flourish. His indie record label T.R.U. (The Real University), featuring Skooly, Cap.1, Fresh, and C White celebrated its fifth anniversary in 2020. In addition to music, his wildly popular tv show Most Expensivest on VICELAND wrapped up its third season in 2019. His “Chain Reaction” sneaker collaboration with Versace hit stores in spring 2018 and was their most popular shoe of the year. His cannabis brand, GAS Cannabis Co., is available throughout California. His Crate Talk interview series (on his YouTube channel, part of YouTube Music’s short-form video mini-series project), which premiered in March 2019, guests to discuss the power of education and entrepreneurship over a game of SELF (instead of HORSE) on a basketball court in Atlanta. Also, in 2019, he starred with Adam Scott in the Super Bowl LIII Expensify tv spot, “the world’s first Super Bowl commercial you can expense.”

ParqEx has got you covered for the 2 Chainz concert. We’ve got several parking spaces all around Summerfest!