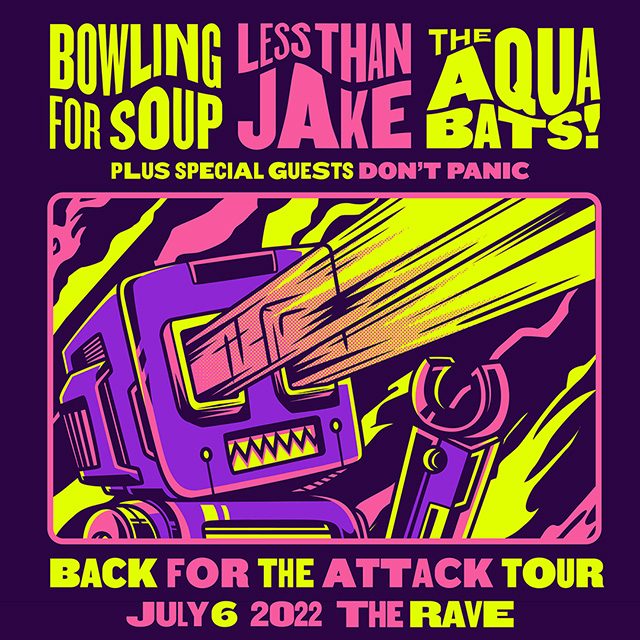 We’re going to party like it’s 1985! The Back For The Attack Tour hits The Rave / Eagles Club on July 6th with BOWLING FOR SOUP, LESS THAN JAKE, and THE AQUABATS with special guest Don’t Panic.
Bowling For Soup has been cranking out cheeky pop-punk tunes since 1994, earning a Grammy nomination in 2002 for their single “Girl All The Bad Guys Want” from their fourth album, Drunk Enough To Dance. Their current hit single is “I Wanna Be Brad Pitt.”

Ska rockers, Less Thank Jake, are frequent visitors to The Rave. This will be their eighteenth play at The Rave, dating back to 1997, touring on their debut album, Losing Streak. They’re one of America’s most beloved rock acts and are best measured by the smiles they’ve slapped on the faces of true believers and new listeners.

The Aquabats! are a zany ska act, originaing in the mid-’90s. Dressed in matching masks and colored costumes inspired by Adam West’s Batman from the ’60s, The Aquabats are a playful, punky indie rock band that will get fans in the party mood.

ParqEx has got you covered for the Bowling For Soup concert. We’ve got several parking spaces all around The Rave/Eagles Club!