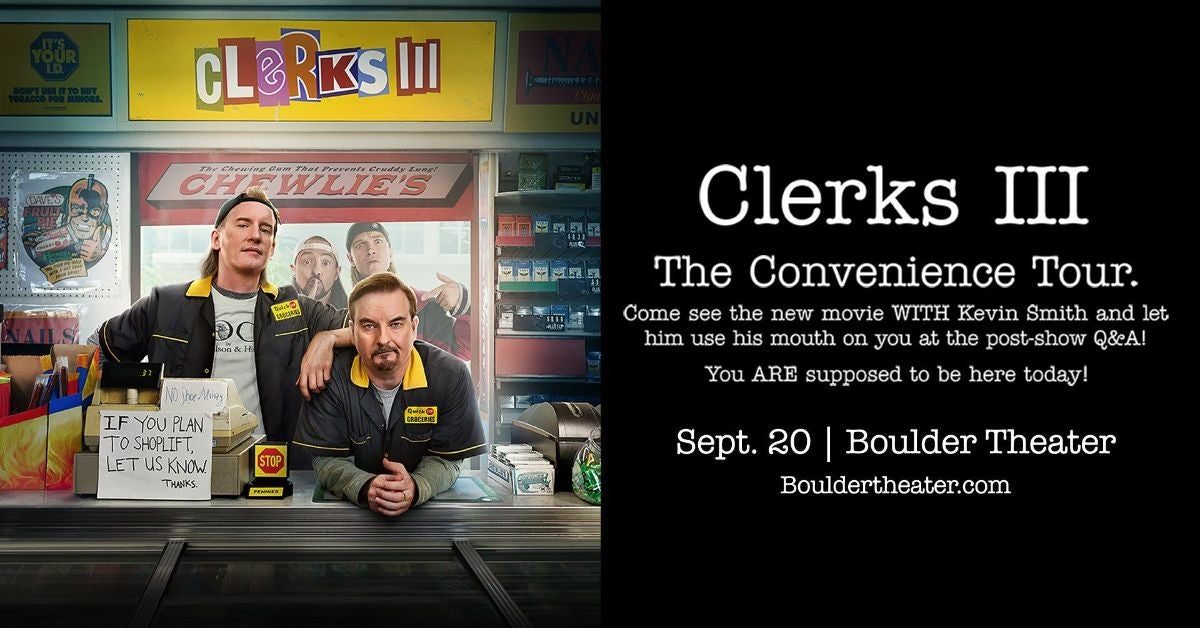 Come see the new movie WITH Kevin Smith and let him use his mouth on you at the post-show Q&A! It’s Clerks III: The Convenience Tour!
You ARE supposed to be here today!

Kevin Patrick Smith is an American filmmaker, actor, comedian, comic book writer, author, YouTuber, and podcaster. He came to prominence with the low-budget comedy buddy film Clerks (1994), which he wrote, directed, co-produced, and acted in as the character Silent Bob of stoner duo Jay and Silent Bob. Clerks won the “Award of the Youth” and the “Mercedes Benz Award” at the 1994 Cannes Film Festival, the “Filmmakers Trophy” at the Sundance Film Festival, and was nominated for three Independent Spirit Awards (Best First Feature, Best First Screenplay, and Jeff Anderson for Best Debut Performance).

The film Jay and Silent Bob also appeared in Smith’s later films Mallrats, Chasing Amy, Dogma, Jay and Silent Bob Strike Back Clerks II, and Jay and Silent Bob Reboot, which are set primarily in his home state of New Jersey. While not strictly sequential, the films have crossover plot elements, character references, and a shared canon known as the “View Askewniverse”, named after Smith’s production company View Askew Productions, which he co-founded with Scott Mosier.

Since 2011, Smith has mostly made horror films, including Red State (2011) and the “comedy horror films” Tusk (2014) and Yoga Hosers (2016), two in a planned series of three such films set in Canada dubbed the True North trilogy.

Last year, Smith executive produced Masters of the Universe: Revelation for Netflix, and coming later this year, Smith will release the much anticipated Clerks III via Lionsgate.

Smith owns Jay and Silent Bob’s Secret Stash in Red Bank, New Jersey, a comic bookstore that became the setting for the reality television show Comic Book Men (2012—2018). As a podcaster, Smith co-hosts several shows on his SModcast Podcast Network, including SModcast, Fatman Beyond, and the live show Hollywood Babble-On. He is known for participating in long, humorous Q&A sessions that are often filmed for DVD release, beginning with An Evening with Kevin Smith.

ParqEx has got you covered for the Clerks III show. We’ve got several parking spaces all around the Boulder Theater!