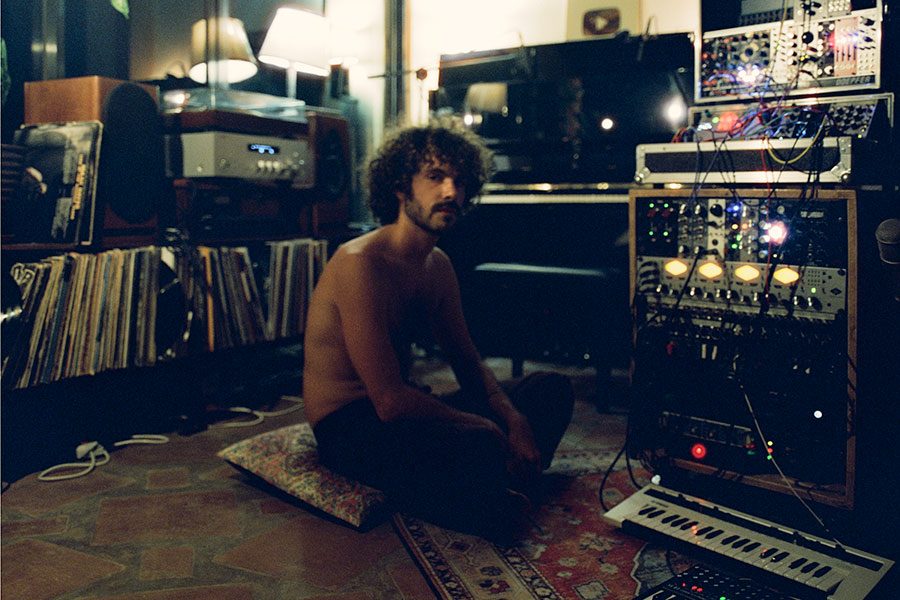 It takes a certain kind of talent to convince Santana to play on your album, but FKJ has that je ne sais quois. The 31-year-old French musician grew up listening to the guitar legend’s music and during the making of his new album, V I N C E N T, he wrote Santana a letter thanking him for his inspiration. “I told him I would listen to the radio as a young boy, in the days before Spotify, waiting for his song ‘Smooth’ to come on so I could tape it, and that he plays his instrument like it has its own language and it speaks to me,” he says. “I just didn’t think he’d end up saying he’d be happy to play on my track.”
That track is ‘Greener’, a sultry neo-soul jam that in many ways hints at what that je ne sais quois might be: FKJ is a virtuosic multi-instrumentalist and producer with one foot in the new world and one in the old, making soulful, limitless music for a restless, genre-fluid generation. His songs blur jazz, soul, folk, rock and experimental beats with an intricacy and intimacy that puts him on a par with the likes of Tom Misch, James Blake and Jacob Collier. V I N C E N T is his second album and signals a new dawn for FKJ, as an artist who sells out venues across the world and is stepping up to take his place at global soul’s top table.

French Kiwi Juice, or FKJ for short, is the moniker of Vincent Fenton, a nod to his Gallic mother and New Zealander father. He grew up in a small French village outside of Tours, isolated from his friends, and so he turned to music for company. He got hooked on his parents’ records by Pink Floyd, Billie Holliday, Nina Simone and Queen, and took up guitar; then, aged seven, the saxophone. “I would play with whatever toys were around, and that helped develop my imagination, and then that evolved into making instruments – I found whatever I could and started putting it together,” he said of his rudimentary one-man bands.

That one-man-band mentality has persisted, collecting instruments as he goes, though he’s never been formally trained; instead developing his own ear. Prestigious music colleges were too expensive and so he eventually moved to Paris to study the sound and film, which helped give him grounding in cinematic arrangements. He fell into the city’s nightlife scene, playing live instruments in clubs in Paris, and became known as a Soundcloud producer who blended house and jazz, as on his vibey 2013 Time For A Change EP.

But then in 2015, he played a festival in the Philippines that changed everything. There he met June, who performs as ((( O )))) and who he’d remixed a track for. Eventually they got married and moved in together on an island off the country’s south coast, where they have created a tropical studio idyll that looks out onto lush rainforest. You can see it in the live session FKJ recorded there in 2019 (over 19m views on YouTube), as he flits between piano, singing and sax. Or in the new album’s ‘making of’ documentary, which glimpses FKJ in his studio, mist settling on the mountains. “I’m definitely influenced by the environment I’m in,” he says. “When I was in Paris, I was hanging out all the time going to clubs, so I made four-to-the-floor stuff. Now it’s calmer, more contemplative.”

The seeds for his more introspective sound were sown with his 2017 self-titled debut, while the track that he did with Masego that same year, ‘Tadow’, further evidenced his effortless ear for intriguing rhythms – the pair made the hip-hop-speared jazz jam out of a day-long improvisation in Paris, duelling on their saxophones, their keyboards and drums interlocking effortlessly. There’s an ease to his collaborations – nothing forced; artists who are like-minded about being guided by groove – see the meeting of minds on the track “Risk’ with the American rapper Bas or his latest remix for PinkPantheress.

But in 2019, FKJ started drawing more from within. He released the Ylang Ylang EP, the result of a tumultuous and devastating year when June miscarried. The couple cancelled their commitments and holed up together to recuperate and make music. The sweepingly romantic jazz of the title track is the EP’s centrepiece, encircled by crisp R&B beats, acoustic guitar flourishes and ambitious sax instrumentals on the other songs. The making of it soothed them as much as it did his growing international fanbase. “With music, I feel safe,” he says. “So when I hear that my music is healing for people, it’s the best compliment.”

The concept for V I N C E N T came about during a solo trip to Los Angeles before 2020. “I just stayed in this house totally on my own, turned my phone off and had some time away from everything to figure out what I wanted to do.” He realised he wanted to tap into the freedom of being a teenager: “back then, I was making music strictly for playfulness, without overthinking it,” he says. V I N C E N T’s opening and closing songs underline the sentiment of the new album: the future-jazz of ‘Way Out’ (a playful mini soundtrack in one; a dainty piano motif underscored by a skittering trap beat and serene strings) and the lullaby-styled ‘Stay A Child’. “I wanted to get back some of that lost innocence of making music purely for pleasure,” he says.

Back in the Philippines, with no wifi and an impending global lockdown, FKJ was quite literally cut off from the world, able to explore music’s endless possibilities. “Sometimes I would get into it for the whole night and go to bed when the sun came up.” Out of this freedom comes an expressionistic, touching album that’s impossible to pin down. There’s no more hiding behind a branch of leaves, as he did on the cover of his 2017 debut: V I N C E N T marks FKJ out as a crucial new voice. He’s redefining chillout music with his bursts of late-night jazz sax and piano, coupled with his wood-cabin whispery vocals, recalling Bon Iver’s early work, and those Santana-styled guitar flourishes.

Much of V I N C E N T is wilfully romantic, sometimes super sexy, and often with its head in the clouds, as on tracks like ‘Us’, a dreamy ode to his wife June, or ‘IHM’, which has a 90s hip-hop flavour slowed right down to lights-out tempo. Not entirely a solo record, ((( O )))) appears on ‘Brass Necklace’ – which has the soft power of The Internet and Stevie Wonder’s keys. It’s no wonder that lead single ‘A Moment of Mystery’, featuring Toro Y Moi, has a spacey vibe: while recording in San Francisco together, FKJ, Toro and his keyboard player Tony took some of what Tony called “holy water” – “we shared this bottle and took a bit of a trip,” laughs FKJ. The result is a gentle electronic ode to long-term love that could rival Tame Impala for melodic progginess.

Little Dragon’s Yukimi Nagano vocal, meanwhile, laces its way through the stunning ‘Can’t Stop’. And there is a call back to FKJ’s dancier beginnings with Let’s Live, a galvanising techno-pop number that blends piano, handclaps and soulful vocals to dazzling effect. Each of FKJ’s songs glistens, lambently, with a myriad of ideas but it never sounds overblown or too dizzying. Testament to his superb production skills, it’s an album full of light and shade – and the occasional shred; check out the absolutely killer guitar solo on ‘The Mission’, a track that sets out his stall, blending a serpentine rhythm and some of that wild abandon with delicious tension.

V I N C E N T is a marvel – and testament to the magic that can happen when you dig deep. “This was a challenging record,” he says. “I’m a perfectionist and it’s hard to shake that off. But once I did, and I let the music take over, I felt totally free.”

ParqEx has got you covered for the FKJ concert. We’ve got several parking spaces all around The Sylvee!