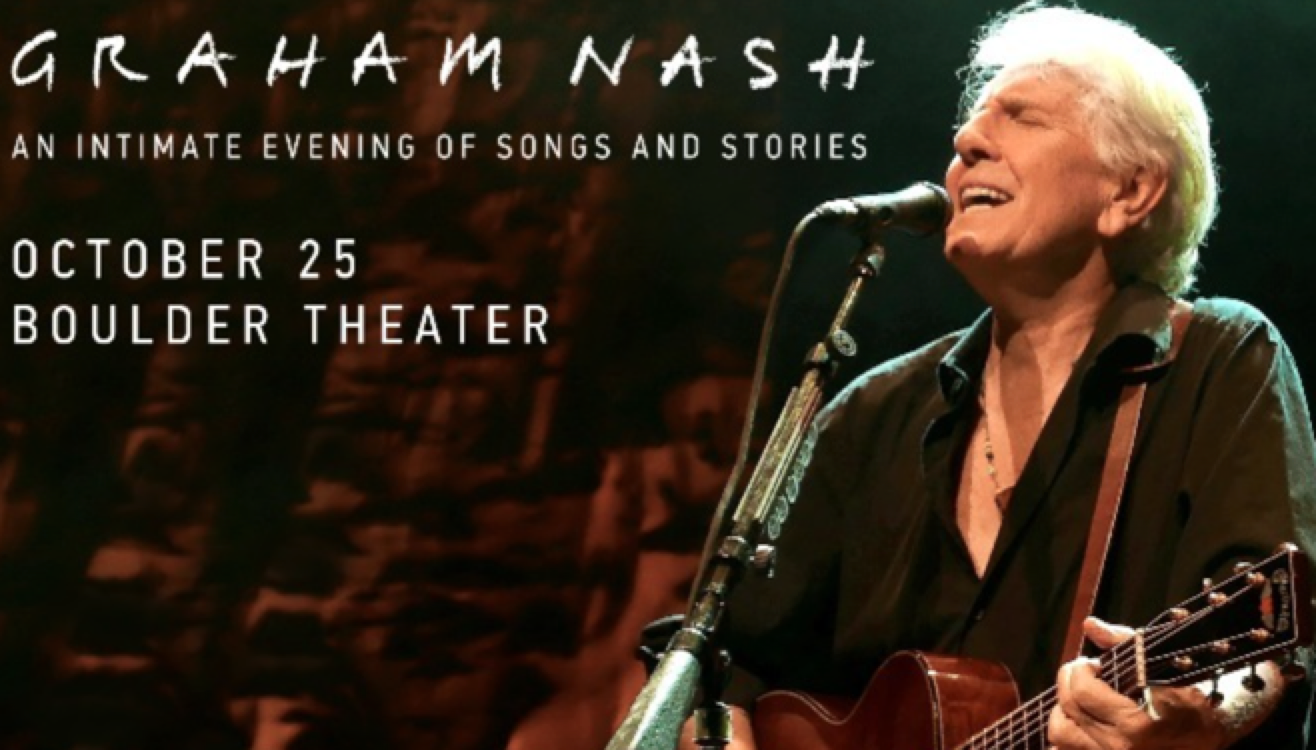 Legendary artist Graham Nash, as a founding member of both the Hollies and Crosby, Stills, and Nash, is a two-time Rock and Roll Hall of Fame inductee who has seen rock history unfold at some of its seminal moments – from the launch of the British Invasion (that’s him on-screen in 1967, an eyewitness to the Beatles global broadcast performance of “All You Need Is Love” from Abbey Road studios) to the birth of the Laurel Canyon movement a year later. An extraordinary Grammy Award® winning renaissance artist – and self-described “simple man” – Nash was inducted twice into the Songwriters Hall of Fame, for his work with CSN and his work as a solo artist, beginning with two landmark albums, Songs For Beginners and Wild Tales.
Now in 2022, comes Graham Nash: Live, a unique project arriving on May 6, on which he revisits those first two classic solo albums in live concert settings recorded in 2019, each in its entirety with their songs in familiar sequence. Nash was joined on stage by a seven-piece band led by his longtime collaborators, Shane Fontayne (guitar and vocals) and Todd Caldwell (keyboards and vocals), The album was mixed by Grammy Award® winner Kevin Killen and mastered by Grammy Award® winner Bob Ludwig.

Towering above virtually everything that Graham Nash has accomplished in his long and multi-faceted career, stands the litany of songs that he has written and introduced to the soundtrack of our lives for nearly six decades. “The art of songwriting,” he has said, “to people who enjoy music but don’t write music, is very mysterious. I’m not even sure how I can describe what I go through. I wake up in the morning, I’m alive, I get on with my day, I check the news from around the world, I check the local newspapers, I check what’s going on with my friends, and I write about my life, that’s all I’ve been doing all my life.”

Nash’s remarkable body of work began with his contributions to the Hollies opus from 1964 to ’68, including “Stop Stop Stop,” “On A Carousel,” “Carrie Anne,” “King Midas In Reverse,” and “Jennifer Eccles,” and continues all the way to This Path Tonight (2016), his most recent solo album. In 2018, Over the Years… compiled Nash’s best-known CSN and post-CSN work, along with more than a dozen unreleased demos and mixes, on a 30-track, 2-CD collection.

The original classic union of Crosby, Stills & Nash (& Young) lasted but twenty months. Yet their songs are lightning rods embedded in our DNA, starting with Nash’s “Marrakesh Express,” “Pre-Road Downs” and “Lady Of the Island,” from the first Crosby, Stills & Nash LP (1969). On CSNY’s Déjà Vu (1970), Nash’s iconic “Teach Your Children” and “Our House” (for Joni Mitchell) beseeched us to hold love tightly, to fend off the madness that was on its way.

Nash’s career as a solo artist took flight in 1971, with the two aforementioned albums further showcasing the depths of his abilities as a singer and songwriter: his solo debut Songs For Beginners (with “Chicago/We Can Change the World” and “Military Madness”), and Wild Tales released in 1974 (with “Prison Song,” “Oh! Camil,” and “You’ll Never Be the Same”).

Three compositions on Songs For Beginners reflect back on the storied breakup of Nash and Joni, “Better Days,” “I Used To Be A King” (which recalibrates the Hollies’ “King Midas In Reverse”), and “Simple Man” (“I am a simple man, so I sing a simple song/ I’ve never been so much in love, and never hurt so bad at the same time”). A third song, “Wounded Bird” was about the aftermath of Stephen Stills’ breakup with Judy Collins.

But the alpha and omega of Songs For Beginners are two chronicles of society’s frayed edges in the Vietnam-era: “Military Madness” (dedicated to Nash’s parents, who quietly and bravely brought up their children in postwar England); and “Chicago/We Can Change the World” (a plea to CSNY bandmates Stills and Young to join him and Crosby at a benefit concert for the defense of the Chicago Eight, “won’t you please come to Chicago/ just to sing”). Autobiographic context similarly weaves through “Sleep Song” (for his first wife Rose Eccles, the paradigm of “Jennifer Eccles”), and “Man In the Mirror” (written off the coast of Cuba, aboard Crosby’s yacht the Mayan, on their epic seven-week, 3,000-mile voyage from Florida to San Francisco, through the Panama Canal).

1974’s Wild Tales addressed (among other issues) unfair jail terms for minor offenses (with “Prison Song”), unfair treatment of Vietnam vets (“Oh! Camil,” inspired by decorated Vietnam vet Scott Camil, who became a founder of Vietnam Veterans Against the War), and the unfairness of fame (“You’ll Never Be the Same”). Nash wrote “Grave Concern” in reaction to the lies and coverups of the Nixon/Watergate investigations, “outraged that the administration’s leaders were lying to the American people and screwing with the Constitution.” In his 2013 autobiography, Wild Tales, Nash described his second Lp as “a good collection of songs but dark and moody, which was where I was at the time … in a deep emotional hole.”

Nash’s output of solo albums over the decades ahead, while they exist in their own time and space, are nonetheless informed to an extent by the presence in his life of his three dynamic musical partners in CSNY. The most resilient, long-lived, and productive partnership to emerge from the CSNY camp was launched (before Nash’s Wild Tales) with the eponymously titled Graham Nash/David Crosby (1972), bookended by Nash’s “Southbound Train” as the opening track and “Immigration Man” as the closer. The duo contributed further to the soundtrack of the ’70s on their back-to-back Lps, Wind On the Water (1975) and Whistling Down the Wire (1976).

On the CSN reunion studio album (1977), Nash took top honors with “Just A Song Before I Go” (written in the space of one hour, and a Top 10 hit single). Lightning struck once more on CSN’s Daylight Again (1982), on which Nash penned the group’s second (and final) Top 10 hit, “Wasted On the Way,” lamenting the energy, time, and love lost by the group due to years of internecine quarrels. There would be five subsequent album projects in the group’s canon, up through the most recent CSN 2012 live double CD/DVD package.

Nash’s passionate voice is frequently heard in support of peace, and social and environmental justice. The No Nukes/Musicians United for Safe Energy (MUSE) concerts he organized with Jackson Browne and Bonnie Raitt in 1979 remain seminal benefit events. In 2011, Nash was instrumental in bringing MUSE back to the forefront with a concert to benefit Japan disaster relief and groups promoting non-nuclear energy worldwide. That same year, he and Crosby were among the many musicians who made their way to the Occupy Wall Street actions in lower Manhattan.

In September 2013, Nash published his long-awaited autobiography, aptly titled Wild Tales, which delivers an engrossing, no-holds-barred look back at his remarkable career and the music that defined a generation. The book landed him on the New York Times Best Sellers list and was released in paperback in late 2014.

In recognition of his contributions as a musician and philanthropist, Nash was appointed an Officer of the Order of the British Empire (OBE) by Queen Elizabeth. While continually building his musical legacy, Nash is also an internationally renowned photographer and visual artist. With his photography, Nash has drawn honors including the New York Institute of Technology’s Arts & Technology Medal and Honorary Doctorate of Humane Letters and the Hollywood Film Festival’s inaugural Hollywood Visionary Cyber Award.

A photographer since the age of ten, Nash’s photos have been shown in galleries and museums worldwide. His company Nash Editions’ original IRIS 3047 digital printer and one of its first published works—Nash’s 1969 portrait of David Crosby— is now housed in the National Museum of American History at the Smithsonian Institution. A collection of his photos is featured in the book A Life in Focus: The Photography of Graham Nash which was released in November 2021 by Insight Editions.

Nash’s lifelong commitment to his work is unwavering. His inspiration is simple: “All the things we stood for, that love is better than hatred, that peace is better than war, that we have to take care of our fellow human beings because that’s all we have on this planet – those things are still true today. I need to know that I’ve brought something into the world that was positive and not negative.”

ParqEx has got you covered for the Graham Nash concert. We’ve got several parking spaces all around the Boulder Theater!