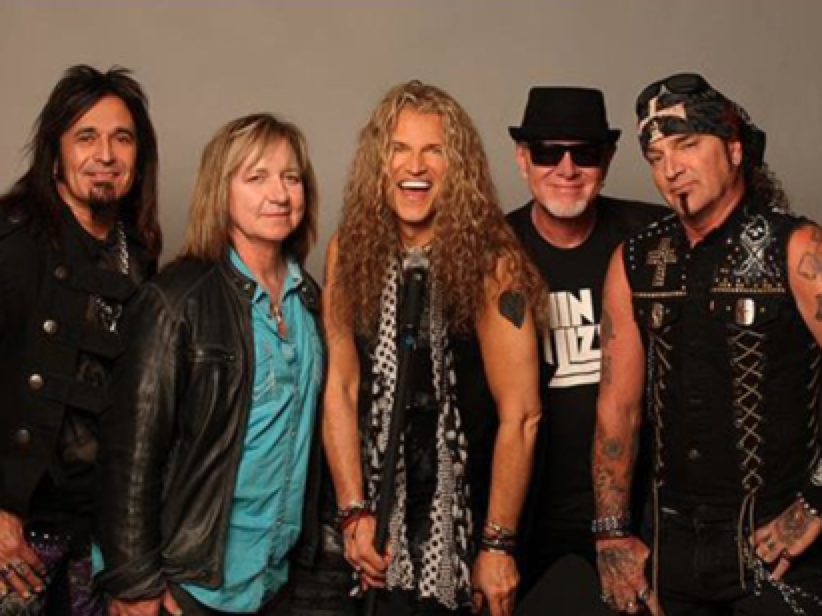 Changes? Yeah, they’ve had them. Fallen off the path? Guilty. Slowed down? No way. Never. Don’t ever count these guys out of the game. For the first time in its 36-year history, Grammy nominated hard rock band legends Great White takes on its third frontman. The band is ready for what lies ahead in 2018, with a respectful nod to the past forging its tried-and-true mantra: these songs are more significant than any one member.

To experience their hits live in concert—“Rock Me,” “Mista Bone,” “Save Your Love,” “House of Broken Love,” and “Lady Red Light”—is to ride an emotional wave of sultry connections, arousing lyrics, and an all-out marathon of hard-hitting orchestrations.

They returned to the classic rock radio charts with “Complicated” off of 2012’s Elation. The band’s 12th studio album, Elation, garnered high marks from numerous rock journalists behind the pesky “Something For You,” the cheeky “Shotgun Willie’s,” and the emotional, Top 10 classic rock radio entry, “Hard To Say Goodbye.”

In June 2017, Great White reunited with its original producer, Michael Wagener, on the thrilling Full Circle. The nine-track album spawned the balls-to-the-wall single “Big Time.” And for the first time in its career, Great White gave a peek behind the curtain to its fans with the accompanying DVD “The Making of Full Circle.”

Great White is Mark Kendall (guitar), Michael Lardie (guitar, keyboards), Audie Desbrow (drums), Scott Snyder (bass), and Mitch Malloy (vocals). Since 1982, the Great White sound has captivated audiences worldwide with crushing blues-based guitar riffs and swagger that invokes an emotional high for anyone that listens. The band’s core writing team of Lardie and Kendall forged numerous hits over the years, and when Desbrow joined in ’85, the grooves hooked a tremendous stride.

Snyder has merged his unforgiving rhythm with Desbrow’s relentless percussion for nearly a decade. New to Great White but well known and respected in rock music, Malloy charted his first solo single, “Anything At All,” in 1992. His subsequent hits “ “Nobody Wins In This War” and “Our Love Will Never Die” also made Billboard’s Top 100.

In 1996 Rock & Roll Hall of Fame inductee, Van Halen asked Malloy to take the reigns as its singer. Although Malloy didn’t take the gig, he established his reputation as a universally- respected frontman. He’s thrilled to be a part of Great White. He’s not trying to be a “clone” of previous singers Jack Rusell and Terry Ilous.

“I have to represent this music honorably,” Malloy said. “I respect what had come before me and have to remind fans of where they first heard these songs. I also have to be myself at the same time. When I first heard my voice with Great White’s music, I knew something special was happening.”

Lardie praised Malloy for his musical chops and reputation.

“We had an immediate rapport with Mitch,” Lardie said. “I’m positive the fans will embrace Mitch and continue to support Great White. This music is bigger than any one person.”

“We’re ready to rock with Mitch,” Desbrow added. “2018 and beyond still has a lot in store for Great White. So don’t ever count us down and out. It feels like we’re just getting started.”

Great White is focused on its newest journey with Malloy. They plan on returning to the studio and will update fans as soon as possible.

ParqEx has got you covered for the Great White concert. We’ve got several parking spaces all around Summerfest!