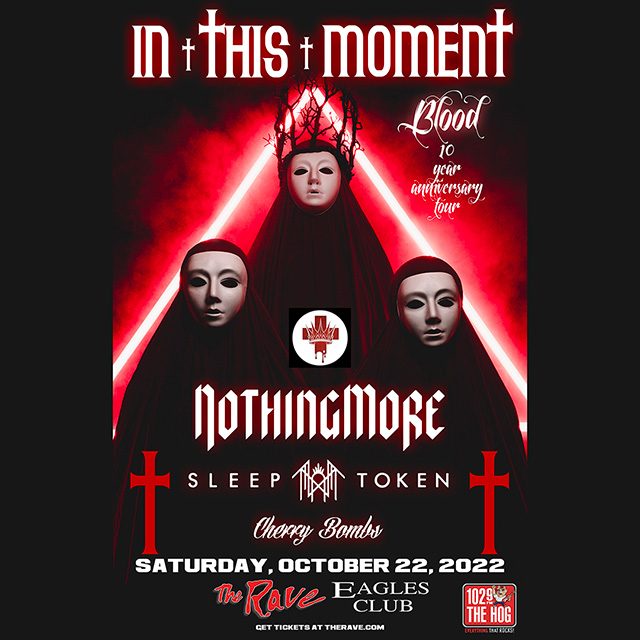 Grammy Award-nominated hard rock outfit IN THIS MOMENT will embark on the “Blood 1983” U.S. tour this summer/fall with special guests NOTHING MORE.
Kicking off August 26 in Evansville, Indiana, the “Blood 1983” tour has the group set to take over stages in major markets including Dallas, Atlanta, Boston, Philadelphia, Cleveland, and Los Angeles before wrapping up in Milwaukee, WI at The Eagles Ballroom on October 22nd.

The tour announcement precedes the release of information for a special EP titled “Blood 1983” commemorating the tenth anniversary of IN THIS MOMENT’s gold-certified album “Blood”.

Since coming to life in 2005, IN THIS MOMENT has presided over a diehard fan base under the watch of “mother” figure and frontwoman Maria Brink — joined by co-founder and lead guitarist Chris Howorth, bassist Travis Johnson, guitarist Randy Weitzel,

ParqEx has got you covered for the In This Moment concert. We’ve got several parking spaces all around The Rave/Eagles Club!

and Kent Dimmel. As millions convened upon the group’s otherworldly and unforgettable concerts, they quietly emerged as one of the most influential and impactful bands of the 21st century.