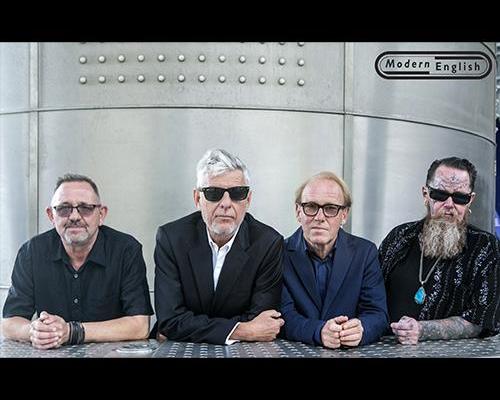 Bands are like families, bound by something more profound than friendship – and liable to implode just as irrevocably. Yet that familial bond can equally draw you back, so it is that four-­-fifths of the original Modern English have recorded their first album together in 30 years.

Funded by PledgeMusic and released via Kartel Music Group, Take Me To The Trees not only reconnect the band to their roots in the vibrant and productive world of the late 1970s/early 1980s post-­-punk Britain, but they have co-­-produced it with Martyn Young of Colourbox and M/A/R/R/S fame, whose last production job was 1986. Moreover, the album’s beautiful cover is by venerated art director Vaughan Oliver, whose first sleeve design was Modern English’s ‘Gathering Dust’ single in 1980.

Original members Robbie Grey (vocals), Mick Conroy (bass), Gary McDowell (guitar), and Steven Walker (keyboards) first reunited in 2010 to tour the US, UK, and Paris before accepting an invitation to re-­-record ‘I Melt With You’ for Mark Pellington’s film of the same name. The band’s most famous track was a US Top 50 single in 1984 after being featured in the rom-com film smash Valley Girl following Sire licensing its parent album After The Snow from their UK label 4AD. “It all went haywire from there, in a Beatles and Stones way, with all the trappings that went with it,’ Grey recalls.

ParqEx has got you covered for the Modern English concert. We’ve got several parking spaces all around Summerfest!