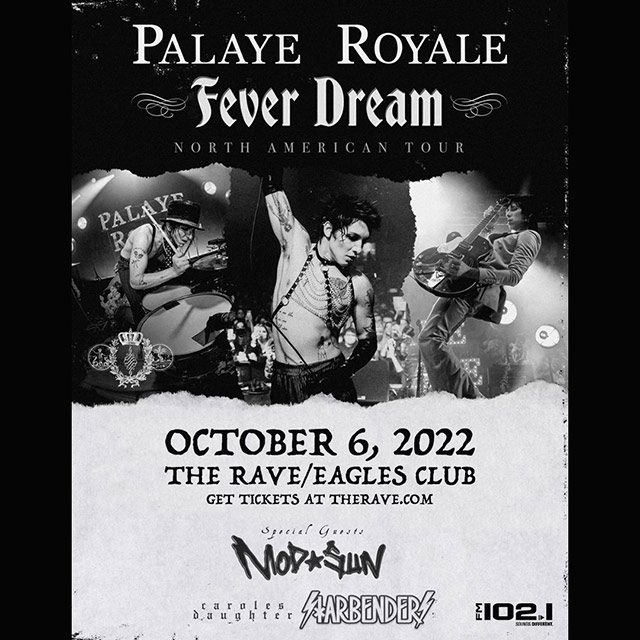 This Fall, Palaye Royale will bring their adrenaline-fueled, rock n’ roll circus on an expansive North American headline tour with direct support from Mod Sun. The 25-date tour runs September 13th through November 6th with a stop in Milwaukee, WI at The Rave/Eagles Club on October 6th.
The tour continues a busy year on the road for Las Vegas-bred brothers Remington Leith (vocals), Sebastian Danzig (guitar), and Emerson Barrett (drums). With unparalleled swagger, Palaye Royale has endlessly delivered an electrifying live show, one that frequently finds Remington hanging from the rafters. Earlier this year, they were direct support on Yungblud’s North American tour, followed by a completely sold-out headline tour across the UK and Europe, which included their biggest headline shows to date, including the Roundhouse in London and an arena in the Czech Republic. Later this summer, the band will hit the European festival circuit before heading back to the states for their headline tour. They will also perform at the highly-anticipated When We Were Young festival in Las Vegas on October 22 and 29.

In May 2022, Palaye Royale released the new song “Broken” via Sumerian Records alongside a video shot in a 12th-century monastery in Prague. Produced by Grammy-nominated Chris Great (Yungblud, WILLOW)), the song is a sneak peek at the band’s new album Fever Dream coming later this year.

Equal parts brit-pop, glam rock, and art-punk, Palaye Royale has amassed over half a billion streams throughout their career and earned a legion of cult-like fans with their fast-paced dirty rock’n’ roll. First landing in Los Angeles as teenagers, the brothers worked their way up through the ruthless L.A. rock scene going from playing basement shows while living out of their car to headlining arenas around the world. The band is readying their fourth full-length Fever Dream, which emerged from a much-needed break in the chaos, returning to their roots and composing most of the album on piano. Equal parts ecstatic head rush and in-depth meditation on the state of the human psyche, the result is Palaye Royale’s boldest and most visionary body of work to date.

ParqEx has got you covered for the Palaye Royale concert. We’ve got several parking spaces all around The Rave/Eagles Club!