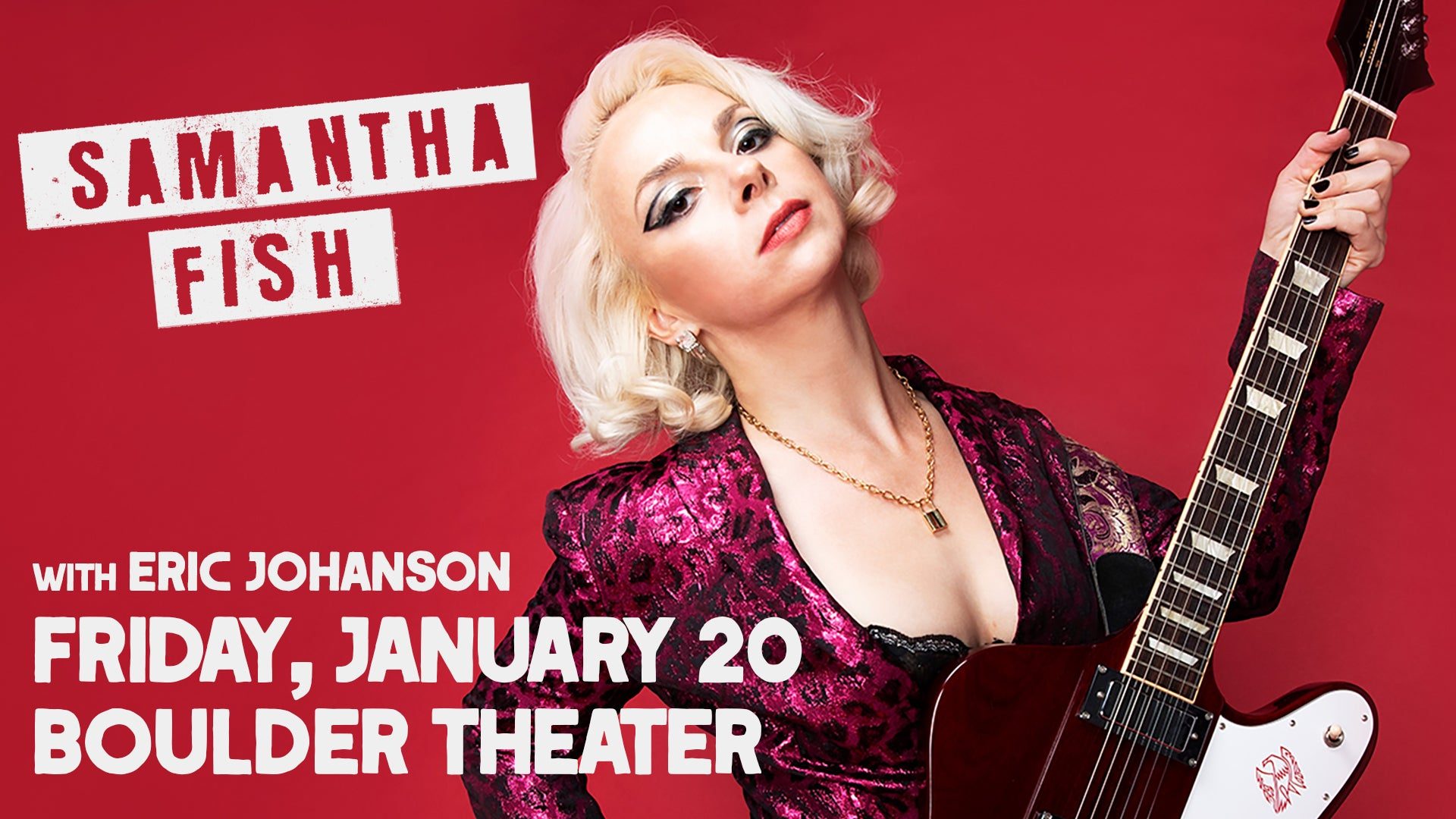 Over the course of her career as an award-winning artist, singer/songwriter/guitarist Samantha Fish has brought extraordinary power to her self-expression, capturing her inner world in combustible riffs, visceral rhythms, and spine-tingling vocal work. On her new album Faster, she joins forces with superproducer Martin Kierszenbaum (Lady Gaga, Sting) and imbues even more intensity into her electrifying brand of blues/rock-and-roll. With Fish accompanied by legendary drummer Josh Freese (Guns N’ Roses, Nine Inch Nails, The Replacements) and bassist Diego Navaira of The Last Bandoleros, the result is a singular body of work both irresistibly galvanizing and emotionally raw.
The follow-up to 2019’s Kill or Be Kind (Fish’s Rounder Records debut), Faster came to life at the famed Village Studios in Los Angeles, where she and Kierszenbaum uncovered new possibilities in her captivating sound. “Kansas City played a major part in bringing us together: I was born and raised in KC and Martin has some familial ties. Shortly after being introduced last year, we had a conversation about making an album,” she recalls. “His track record was perfect for what I wanted to do with this album, which was to expand into different genres while retaining the roots I’d built in the blues world.” Revealing her affinity for North Mississippi blues heroes like R.L. Burnside and wildly inventive iconoclasts like Prince, the album ultimately embodies an unbridled energy true to its emotional core. “The whole record has a theme of taking charge and taking the reins, in a relationship or in life in general,” says Fish. “I really thought that after 2020 I’d end up with a really dismal, bleak album, but instead, we came up with something that’s fun and sexy and so empowering.”

Faster opens on its spellbinding title track, a fiercely stomping number whose vocal hook states her intentions to “make your heart beat faster.” Immediately making good on that promise, Fish next unleashes the restless urgency of “All Ice No Whiskey,” a pop-perfect powerhouse she considers something of a dare. “‘All Ice No Whiskey’ is a way of telling someone they don’t have any of that substance I’m looking for—sort of like, ‘Come back when you’ve got something interesting for me,’” Fish says. That defiant spirit also infuses “Better Be Lonely,” a fantastically loose and freewheeling track graced with a frenetic guitar solo. “That song’s about putting someone on ice, where you’re telling them: ‘I don’t want you right now, but when I am ready to have you, you better be there,” says Fish. Another bold statement of self-possession, “Twisted Ambition” brings mercurial rhythms and jagged guitar work to Fish’s refusal to let others define her. “It’s about flipping the roles of power—taking control and confronting a world that tries to put you in your place,” she notes.

While Faster never fails to showcase the gritty vitality of Fish’s musicianship, much of the album journeys into elegantly eclectic sonic terrain. One of Faster’s most vulnerable moments, “Crowd Control” unfolds in delicate beats and shimmering keyboard tones, forming a dreamy backdrop to Fish’s self-reflection. “It’s about confronting your demons – separating the version of yourself that you portray to the world from who you actually are. At its core, it’s about expressing vulnerability,” Fish explains. “When I wrote it, it felt like a true rootsy, Americana song. Martin added keys and modern synth textures that really brought it back around to this plaintive mood.” Featuring a guest spot from rapper/singer/songwriter Tech N9ne, “Loud” drifts from doo-wop reverie to guitar-fueled frenzy, riding that tension to glorious effect. “Tech N9ne is by far one of the biggest artists to come out of KC, and one of the biggest self-made artists in the world,” says Fish. “He was perfect for ‘Loud,’ which is a song about speaking your truth as loud as you can. It’s about saying to the person you’re with: ‘I want you, but I want you ugliness and all. So don’t ever be afraid to speak your mind and speak your heart.’” And on “Hypnotic,” Fish lays down a mesmerizing piece of R&B-pop, telegraphing unfettered desire in her seductive vocal delivery and lushly textured grooves. “‘Hypnotic’ is about putting somebody under a spell,” she says. “There’ve been times in my life when I haven’t felt all that in control in a relationship, and this song was my chance to become that person.”

For the final track to Faster, Fish selected the album’s most tender song, a gorgeously stark and slow-burning ballad called “All the Words.” “It’s about letting a relationship go because that’s what’s best for everyone, even though it’s a horribly painful experience,” says Fish. “When we recorded it, it was just me on guitar, Diego on bass, Martin playing the grand piano. It’s a song I hold very close, and it felt right to make it as raw as possible.”

Throughout Faster, Fish threads her songwriting with the kind of nuanced storytelling and ultravivid detail that comes from carefully honing her craft. “Because we usually tour so much, most of my albums have been written in hotels between shows,” she says. “This was the first time I’ve ever had the opportunity to just sit in one place, and pour everything that was happening around me into songs.” Growing up in Missouri, Fish first found her love of songwriting in her late teens, mining inspiration from the likes of Tom Waits and Leonard Cohen. Having taken up guitar at age 15, she soon began seeking out gigs by cold-calling countless local bars. “I used to open the phone book and call up every place in Kansas City, even if they didn’t have live shows,” she remembers. “I had maybe a three percent success rate, but eventually I started filling up my calendar—if you put on a good enough show, word of mouth gets around.” Over the years, Fish has maintained her reputation as a phenomenal live act and repeatedly turned out critically acclaimed albums, in addition to earning an ever-growing number of accolades.

For Fish, one of the greatest joys of making music is the powerful exchange of energy at her incendiary live shows. “I fell in love with music from going to shows, and I know how cathartic it can be. It heals your heart,” she says. “Anytime I play live, I just want to want to make people forget about everything else in the world and feel that same joy that I feel on stage.” And in the process of creating Faster, Fish experienced a similar exhilaration—a sustained head rush that’s entirely palpable in every track on the album. “There’s such a transformation that can happen in the studio when you really own that freedom to be creative,” she says. “I feel so charged up in those moments like I can be whoever I want to be. It’s just me and these incredible musicians trying to make a piece of art that speaks for itself and contributes something new to the world. It’s never hard to feel inspired or empowered when that’s the mission.”

ParqEx has got you covered for the Samantha Fish concert. We’ve got several parking spaces all around the Boulder Theater!