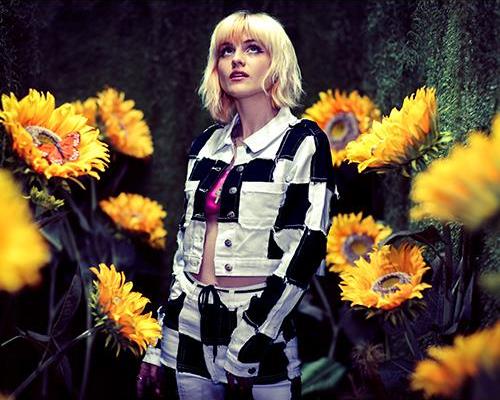 Sarah Barrios is a breath of fresh air. With her unapologetically sweet voice, infectious melodies, and playful pop musicality, Sarah makes a magnetic entrance with her debut single “I Didn’t Mean To,” the first taste of a three-part sonic narrative she will release this year.

A proud reading enthusiast, her approach is akin to writing a novel. Weaving together stories with raw human emotion, Sarah wins her audience at first listen with a textured experience of imagery and color. “It’s pastel pinks. It’s gentle, soft, innocent. It’s falling in love and falling apart,” says Sarah. “It’s looking inside yourself and realizing you might not get everything you want.”

Influenced by an intelligently diverse spectrum ranging from Jane Austen to Sci-Fi books, The Beatles and Fleetwood Mac to Jon Bellion and Paramore, Sarah’s music evokes nostalgia and anticipation for the future.

“I Didn’t Mean To” looks thoughtfully in the rearview mirror while driving with the windows down to summer’s first dance party. Sarah’s polished performance is disarmingly seasoned. But, debut or not, the highly intentional, focused introduction to her sound is evidence of years spent honing her craft.

Growing up in the small town of Torrington, Connecticut, with her parents and two younger brothers, Sarah’s childhood revolved around music. Her parents played in bands and encouraged family jam sessions and jazz nights at home. “Music was a big deal for the family, but I never thought making music as an actual job was possible,” says Sarah. Shy and hoping to make friends with the boys in the local pop-punk band, Sarah picked up the guitar at age 13. Soon discovering songwriting, she instead kept it to herself for catharsis. “I’d play on the bathroom floor because of the acoustics. Writing my feelings down to music, all I did was play guitar and sing, every hour of every day.”

After high school graduation, she enrolled in college with plans to become an elementary school teacher, but her perspective changed after a breakup. “It was that moment when you realize – wait, I can do whatever I want,” says Sarah. So she dropped school, got a job at a local grocery store, and began to pursue a career in music. She posted covers on YouTube for a few years and spent her paycheck traveling to open mics and nearby gigs. Eventually, she connected with her manager after finding his emails in her spam folder. Feeling an immediate connection, Sarah packed her bags and flew to Los Angeles on a one-way ticket. “I moved in and slept on his couch for five or six months,” says Sarah. “It’s probably the coolest, craziest thing I’ve ever done.” After signing a publishing deal with Warner Chappell, Sarah spent a year writing for other artists.

“I was in a rut one day. Feeling a lot of things at once I didn’t know how to express,” says Sarah. She then wrote a song that would insight and anchor her debut project. “I cried in the bathroom afterward. It was the first vulnerable song, a piece of me I hadn’t shared before. It was a game-changer for how I approached writing songs. Saying exactly how I felt in that specific moment.” Inking a deal with Sony Arista, Sarah finished recording two EPs and an album between Los Angeles and Sweden and now prepares to share her project with the world. It listens like a novel with the central theme that “Life is weird, and you spend your entire life figuring it out,” says Sarah. “It’s ok not to know things. It’s ok to ask questions about it.” In her songs, she asks herself, “Who am I as a person? Do I like who I am?” Such vulnerability invites the audience to embark on the journey with her.

When recording in Sweden, Sarah decorated the studio with twinkle lights to brighten the mood. She sets the scene. She gets caught in the moment. Like getting lost in the pages of a fantasy novel, like getting swept up in the atmosphere of dancing with friends under twinkle lights – Sarah Barrios is a welcome escape to simpler, more beautiful times.

ParqEx has got you covered for the Sarah Barrios concert. We’ve got several parking spaces all around Summerfest!