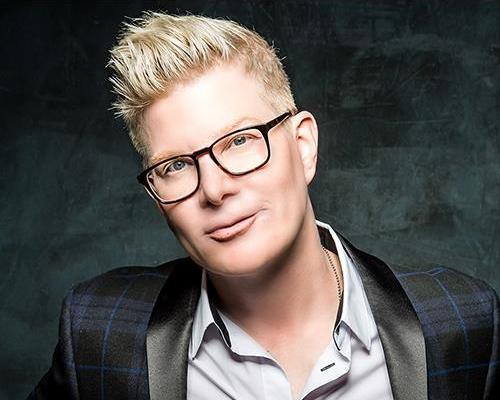 Shaun Johnson, an Emmy-winning singer/songwriter, seemed destined for a life of music from the beginning. “One of my earliest memories,” he says, “is of performing at state fair talent shows with my little sister. We’d sing Sonny and Cher songs, a cappella, when neither of us was tall enough to reach the microphone.”

Originally from the small town of Saint Joseph, Iowa, Shaun attended Saint John’s University before settling in Sioux Falls, South Dakota. He began his career with the nationally known vocal group, Tonic Sol-fa. This quartet has sold nearly two million albums independently and featured in Newsweek and on the Today Show. Shaun is still an active member.

In 2016, Shaun put together a group featuring some of the best instrumentalists and arrangers in the Midwest– guys who’ve toured with numerous luminaries, who are Music Educators of the Year, and who are integral members of collegiate jazz faculties. His vision was to create a contemporary big band sound with a pop flair, honoring legends like Frank Sinatra with a nod to Michael Bublé while giving the music his twist – performing songs ranging from the “Spiderman Theme” to increasingly popular original work.

The initial holiday tour received overwhelming feedback, and another expanded holiday tour was undertaken the following year. The proceeds from those first small tours were subsequently donated to local charities. In 2018, with increased presenter and fan demand, the BBE added even more cities to the holiday tour and, for the first time, began accepting regular season shows, which expanded rapidly across the U.S.

Look for the BBE’s first PBS special, “Spirit of the Season,” to air across North America, as well as the Big Band Experience’s very first studio recording, “Capitol,” which garnered a top 5 debut on the Billboard Jazz Chart.

ParqEx has got you covered for the Shaun Johnson Big Band Experience concert. We’ve got several parking spaces all around Summerfest!