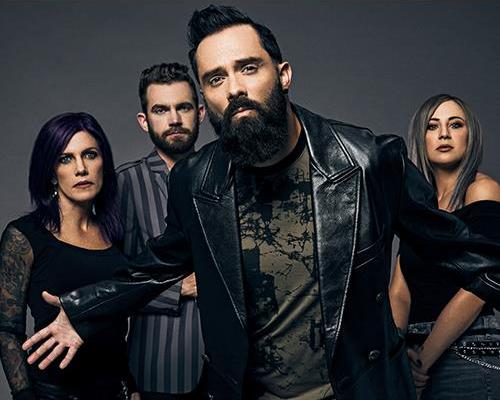 Not every rebellion gestates in darkness. As one of the best-selling rock bands of the 21st century, Skillet continues to rebel against conventions, doubts, expectations, and rules with the intent to uplift in light. The two-time GRAMMY® Award-nominated Pandora Billionaires Club members and multiplatinum Kenosha, Wisconsin quartet—John Cooper [lead vocals/bass], Korey Cooper [guitar/keys], Jen Ledger [drums/vocals], and Seth Morrison [lead guitar]—never compromise their integrity. Instead, they’ve traveled their path to unprecedented heights with an urgent sound, undeniable energy, and unbreakable spirit.
On their eleventh full-length album, Dominion [Atlantic Records], Skillet encourages a different kind of revolt when the world could use it…

“I call it positive rebellion,” exclaims John. “It’s a rebellion against those internal elements such as fear and anxiety. It’s a rebellion against external forces wanting you to be something you don’t want to be. It’s a celebration of the freedom we have in our lives. It’s very anti-establishment. It’s a rallying call to stand up for your beliefs and not be silenced. It might be unpopular in certain places, but there’s nothing more rock ‘n’ roll than that,” he smiles.

Skillet has embodied rock ‘n’ roll’s evolution from day one. To date, they have sold 12 million albums worldwide, and they’ve earned over a dozen RIAA certifications in recognition of gold, platinum, or multiplatinum status. Landmark album Awake notably went 3x-platinum and picked up a Billboard Music Award. Plus, it housed the 2x-platinum track “Awake & Alive,” 3x-platinum track “Hero,” and 4x-platinum track “Monster.” The latter is “one of the most-streamed rock songs in history” with over 1.2 BILLION global audio streams. 2019’s Victorious marked the group’s fourth consecutive Top 20 debut on the Billboard Top 200. The album concluded the year on LoudWire’s “The 50 Best Rock Albums of 2019” and yielded the Top 10 rock radio smash “Legendary,” racking up north of 100 million streams. The band’s music also resounds throughout culture, landing syncs from WWE, Marvel, ESPN, MLB, NHL, and NFL. As a touring phenomenon, they regularly sell out arenas worldwide, playing in over 26 countries and six continents. They have earned acclaim from Billboard, USA Today, The New York Times, and many more. Their debut graphic novel, EDEN: A Skillet Graphic Novel with Z2 Comics, emerged as the publisher’s best-selling book of all time and launched a favorite fan series, with their second graphic novel releasing in the fall of 2020, EDEN: The Aftermath.

As the Global Pandemic brought 2020 to a halt, Skillet creatively pushed forward. The musicians logged on to ZOOM and recorded what would become Dominion with producer Kevin Churko [Papa Roach, Disturbed, Five Finger Death Punch] and co-writer Kane Churko over the year. The Churkos inspired the band to stretch their sonic palette once again.

ParqEx has got you covered for the Skillet concert. We’ve got several parking spaces all around Summerfest!