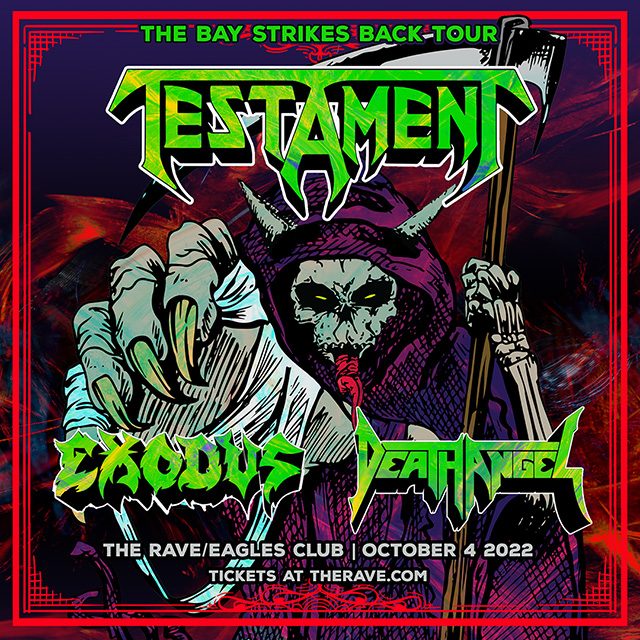 TESTAMENT has announced the second North American leg of “The Bay Strikes Back Tour” with EXODUS and DEATH ANGEL. TESTAMENT, EXODUS and DEATH ANGEL kicked off the first 2022 edition of “The Bay Strikes Back Tour” earlier this year. The show marked TESTAMENT’s first appearance with drummer Dave Lombardo since he rejoined the group earlier this year.TESTAMENT frontman Chuck Billy commented: “We’ve all been having a killer time playing a lot of sold-out shows for diehard metal fans across the U.S. and we wanna keep the party rolling!”
Added TESTAMENT guitarist Eric Peterson: “We’re so excited to do a second leg of ‘Bay Strikes Back’ tour. It’s been a long time coming and now things are starting to gel with Dave. We will be adding some newer songs and some older ones too into the set METAL!”
Said EXODUS’s Gary Holt: “This tour has been so raging, so crushing, what do we do to follow it up? We do it again! EXODUS will be joining TESTAMENT and DEATH ANGEL for another round of ‘The Bay Strikes Back Tour’ in the U.S.! Hitting some major markets and also Canada! More brutality on tap for all, come join the violence!”
DEATH ANGEL’s Mark Osegueda commented: “I can’t begin to tell all of you how excited DEATH ANGEL is that this AMAZING tour has been extended with the second leg of North American dates! Night after night all three bands see how amazing the crowd reactions have been and we as band members are also so appreciative that we’re back doing what we love doing most of all! Playing music and exchanging energy with the most passionate fans of all! Thrash metal fans! ‘The Bay Strikes Back Tour’ is extending its endless reach! See you on the road!!”

ParqEx has got you covered for the Testament concert. We’ve got several parking spaces all around The Rave/Eagles Club!