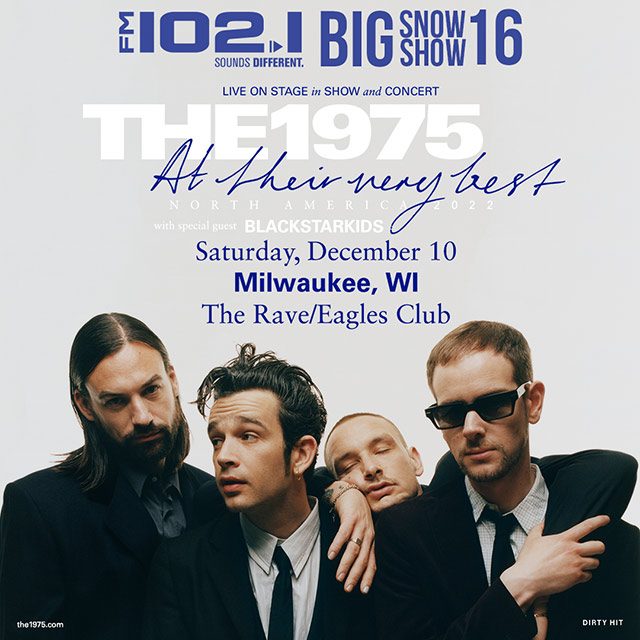 The 1975 have flirted with glossy pop, anarchist punk, gritty garage rock, electro-funk, and country throughout their tenure as a band. In addition, they’ve used their incisive songwriting to ask existential questions surrounding self-discovery, nihilism, climate change, mental health, addiction, post-modernism, and cybersex. So what’s a band to do when they’ve seemingly done it all? After 20 years together, The 1975 decided it was time for a return to form—a way to celebrate their beginnings and showcase their growth. Their fifth effort is Being Funny in a Foreign Language—perhaps the band’s most intimate-sounding record yet.
While The 1975’s past few records were brimming with massive production—programming and synths— Being Funny is rooted in performance. “We wanted it to capture the performance of all of us, allowing people to be a witness to a moment as opposed to a witness to some constructs.” As a result, it’s much of a departure from the maximalism of their last record, Notes on a Conditional Form. “This album, more so than Notes, is a follow-up to A Brief Inquiry. There were conversations about whether it was a part two or something like that, but it was very much his beast by the end.”
Being Funny is somewhat of a rite of passage for The 1975. Healy, four years clean from heroin, left his identity crisis of his 20s behind and felt wholly settled into his career as a writer, while lead guitarist Adam Hann had his first child. The band has grown up and, in many ways, settled down. “We’re men now; we’re fucking good.” And notably, Being Funny was the first time The 1975 made a record without strife or addiction getting in the way. With maturity came clarity, allowing the group to be more present than ever. “It was the first record where I was like, ‘Fuck it. I’m just going to be here now,’ which is why it sounded more coherent than previous records.” With Being Funny, the band realized their albums didn’t need to broach every topic at once. Instead, they could equally be as affecting as contextualized snapshots of a specific period in time.
Like all of The 1975’s work, Being Funny sees Healy striving to improve and figure out how to do so tangibly. And it all comes back to the album’s title. “When I’ve seen people being funny in a foreign language, it’s the height of intelligence and, therefore, the height of empathy. ISo  think that if everybody could be funny in a foreign language, it would probably save the world.”

ParqEx has got you covered for The 1975 concert. We’ve got several parking spaces all around The Rave/Eagles Club!