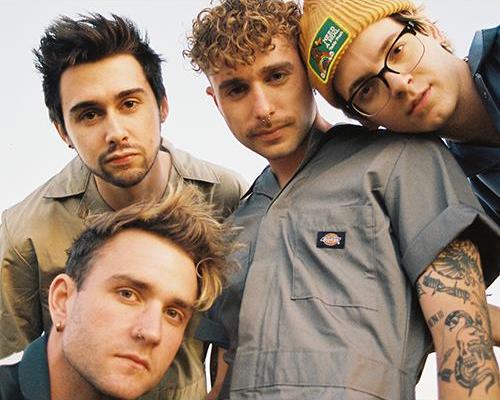 Kicking off 2021, The Wrecks released their single “I Want My Life Back Now” along with their road trip-themed music video. The alt-rock quartet The Wrecks ended their busy 2020 on a high note, with the release of their new EP, Static. The four-song collection offers everything from upbeat dance tracks to ballads about longing for that particular person.

The release of Static follows up their long-awaited debut LP “Infinitely Ordinary” released May 1st, 2020 via Big Noise. Led by vocalist/producer Nick Anderson and rounded out by Aaron Kelley (bass), Nick “Schmizz” Schmidt (guitar), and Billy Nally (drums), The Wrecks created an album that jumps from the anxiety-inducing “Freaking Out” to the self-sabotage anthem “Fvck Somebody,” the heart-pounding “Out Of Style,” to the introspective ballad title track – and throughout it all, Anderson had one goal in mind. “Music has to be honest for me, before anything else,” he says. “All of our songs are through stories, the anecdotes all happened—that’s the only way I know how to write something that feels impactful.”

The Wreck’s debut full-length album Infinitely Ordinary, is the follow up to their two EPs; the first, “We Are The Wrecks,” was recorded just days after their conception, as they snuck into a studio where a friend was house sitting. Having no experience recording or mixing, Anderson took a crash course via YouTube tutorials, and sent their first song, “Favorite Liar”, to Jeff Regan at SiriusXM’s AltNation.

“Favorite Liar” was immediately added to his playlist, resulting in the #1 spot on the Alt18 Countdown, months of charting in the countdown’s Top 5, and the band’s first Top 40 Alternative radio hit. “Favorite Liar” currently has over 21 million streams on Spotify.

The second E, “Panic Vertigo,” included the fan-favorite track “JamesDean” which has racked up 5.1 million streams.

With a high-energy, crowd-captivating live set, The Wrecks have built a reputation as a top live band, securing support tours with The Driver Era, Nothing But Thieves, New Politics, The Maine, The Hunna, and Silversun Pickups, as well as selling out multiple headlining tours.

ParqEx has got you covered for The Wrecks concert. We’ve got several parking spaces all around Summerfest!