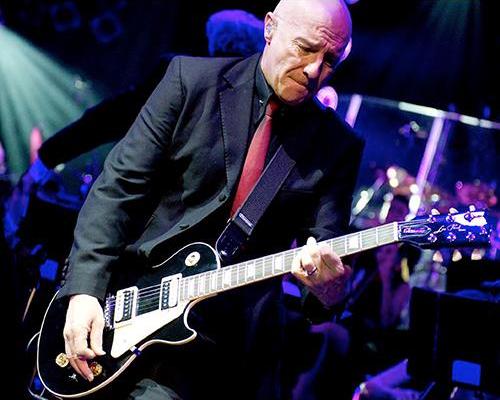 An artist who has received Ivor Novello, Grammy, and BASCAP awards and a flotilla of gold and platinum records needs a minimal introduction.
Musical success is seldom measured in periods of more than a few years, if not Andy Warhol’s often quoted “fifteen minutes,” so the fact that by the time Midge’s single “If I Was” went to No1 in 1985, he had already crammed several musical lifetimes into a ten-year professional career speaks volumes – Slik, The Rich Kids, Thin Lizzy, Visage, Ultravox and of course the most famous one-off group in musical history Band-Aid had by then all had the guiding hand of his musical navigation.

Then you have to take account of Midge’s musical directorship of a series of rock concerts for The Prince’s Trust, Wicked Women for Breakthrough and in honor of Nelson Mandela; a Lord Provost award for services to Scottish music; record production for Phil Lynott, Steve Harley, and countless others; his video direction of memorable hits by the Fun Boy Three, Bananarama, and others, or a whole swathe of landmark singles by Ultravox; TV, theatre and film music credits ranging from ‘Max Headroom’ to stage and big screen.

His musical roots were playing and learning the records of the Small Faces and other rockers who did things their way; Midge appeared to the broader public in a moment of heady teen success with Slik. Their sway-along Bell single ‘Forever And Ever’ took over at No.1 in the UK from Abba’s ‘Mamma Mia’ on Valentine’s Day 1976. Soon outgrowing Slik’s pop dimensions, Midge was snapped up by ex-Sex Pistol Glen Matlock the following year for his new outfit, the Rich Kids, who charted amid an avalanche of press with a self-titled EMI single early in 1978. By April ’79, with his name added to many musicians’ contact books, Ure had been asked by Billy Currie, Chris Cross, and Warren Cann to become the new frontman in Ultravox.

The band significantly influenced the electro-pop movements of the early ’80s and many an open-minded studio and bedroom experimentalist since. Their successful trademark combined Midge’s powerful guitar riffs with sweeping synthesizer motifs, enigmatic imagery, and state-of-the-art visuals. Throughout the first half of the ’80s, they brilliantly combined the responsibilities of top 10 artists and innovative style-makers.

ParqEx has got you covered for the Ultravox’s Midge Ure concert. We’ve got several parking spaces all around Summerfest!