Highlights of the 2016 Chicago Auto Show this Past Week

The week-long 2016 Chicago Auto Show, which culminated this past weekend at McCormick Place, featured an extensive array of vehicles.  Some of the vehicles on display included hybrids, electric, convertibles, crossover, diesel, economy and sports cars, to name a mere few. 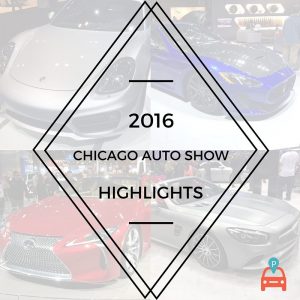 Examples of the electric car technology at the auto show could be seen in two of the more prominent of the bunch, the Nissan Leaf and the Chevrolet Volt.  However, many more such cars were present as well.  For the record, electric cars come in a few different forms, such as battery-powered only and extended range electric.  The latter will operate until the charge of its battery runs out, then it switches to gasoline.

There were also numerous hybrid cars on display at the auto show.  In no particular order, a few of them were the 2017 Chrysler Pacifica, 2017 Kia Optima Hybrid, the 2017 Lincoln MKZ, the Mercedes-Benz S and the Porsche Panamera E-Hybrid.  The main allure of the hybrid vehicle is that it utilizes two different energy sources for its power. Hybrids are highly efficient in improving fuel economy.

With so much new technology in vehicles on the rise, we at ParqEx feel like part of the team, and we get just as excited at the technological success within affiliated industries. This is especially true for the Chicago Auto Show. ParqEx is a community-based private parking marketplace app available on app stores.  Contact us for much more information.