Top 10 Cities for Food in America 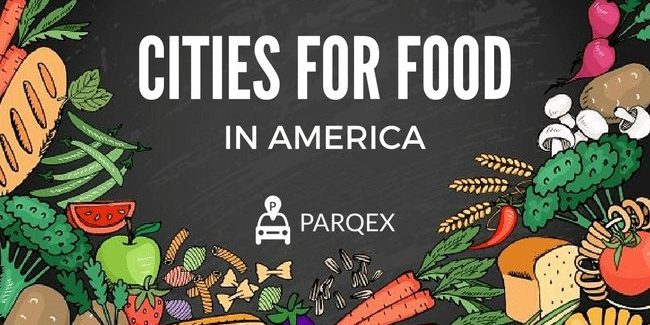 Where can you find the best restaurants in United States? Opinions vary, of course, but as far as we’re concerned, these are the top 10 cities for the best food in America.

What sort of food are you in the mood for? Whatever it is, New York City probably has it. From sidewalk carts to sit-down restaurants, there are over 45,000 restaurants in the Big Apple. Unless you’re in the mood for Culver’s, a primarily Midwestern delicacy, you can find almost any type of food in New York City.

The Washington Post declared Chicago a great place to eat, whether you’re interested in great everyman food or haute cuisine. From the finest pizza in the world to the casual comfort of gastropubs like Centennial or the Copper Fox to places like Avec, Girl and the Goat, Alinea, and Grace, the Windy City has eateries for every budget and every palate. Travel + Leisure agrees that Chicago is definitely among the top ten American cities for great restaurants.

You’ll need a few napkins to take on the Windy City’s food scene. Deep-dish pizza, fully loaded hot dogs, Garrett popcorn, Italian beef – all these dishes are uniquely Chicago. Arguably the culinary capital of the Midwest, the city also consistently receives praise from critics for its award-winning restaurants that serve up a side of picturesque Chicago River views.

The Washington Post, Travel + Leisure, and US News & World Report all agree that Charleston, South Carolina, is a diner’s delight. Southern hospitality combines with down-home cooking to create a gourmand’s paradise.

Houston is far more than Tex-Mex chili. Houston is the home to some of the finest Vietnamese food this side of Saigon, authentic Chinese cuisine, Cajun cooking to rival any you’ll find in Louisiana, and steaks nearly as good as you’ll find here in Chicago.

The nation’s capital has some of the finest restaurants in the country when it comes to foreign cuisine. Although President Kennedy called Washington a “city of southern efficiency and northern charm,” it’s been improving recently in the dining department with hip clubs, trendy bistros, and elegant restaurants, as well as several moderately priced eateries.

If you’re interested in Cuban cuisine, like Cubano pork sandwiches, arroz con pollo and cafe con leche, Miami is the place to go. There are also many seafood and Caribbean restaurants.

Los Angeles is a city that takes fusion cooking to heart. While you’ll find ethnic restaurants of every nationality, you’ll also find chefs who love to combine ingredients and flavors from one culture with the recipes of another. In southern California, formal means wearing tie-shoes instead of flip-flops, so dining may be more casual than you’re used to in other parts of the country.

There are over 3,500 restaurants in Portland, as well as 600 food carts. Portland is very pedestrian-friendly, so the convenience of the sidewalk food carts is appreciated. According to US News & World Report “in a city where fresh and organic foods reign supreme, Portland’s fare consistently receives praise from industry experts and travelers alike.”

Portland, Maine, is famous for its fishing fleets and lobstermen, so it’s no surprise that you’ll find great seafood here. From fish and chips to oysters to steak and lobster, Portland’s restaurants will tempt your taste buds. Stop by Back Bay Grill; it’s one of the most popular restaurants in town.

If you’re looking for a great restaurant in Chicago, or a place to park, contact the ParqEx team!