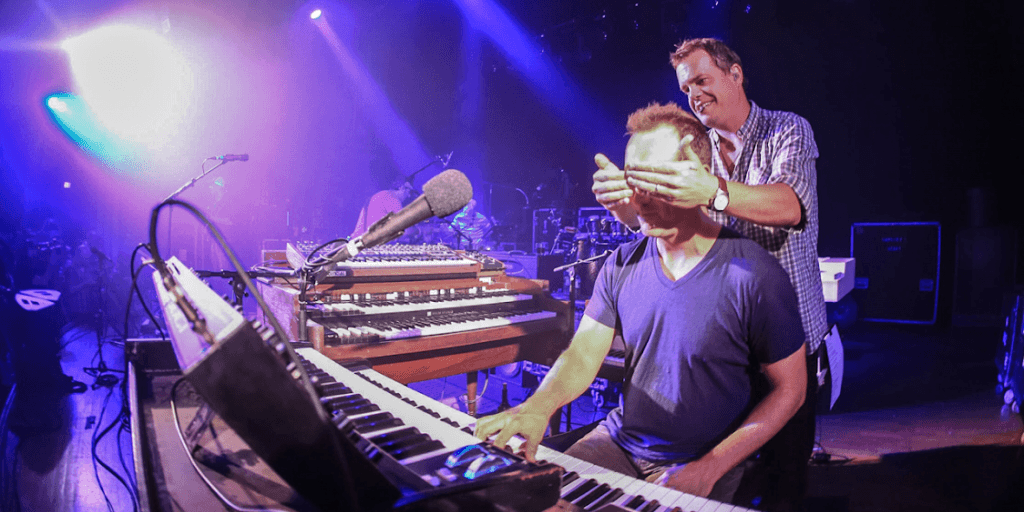 When Brendan Bayliss was born on August 11th, 1976 in Annapolis, Maryland, it was immediately speculated that Brendan would become a tennis champion. While his father went on to an illustriously successful career in tennis as a university head coach, Brendan’s future shifted to music as soon as he picked up the guitar in high school.

While at Notre Dame, he met Joel in a music theory class his sophomore year. Joel was reportedly thrilled to find “someone normal” joining the class, but alas, Brendan dropped out, saying “there was no one cool in that class.” After being kicked out of three bands – he apparently didn’t like to practice – he met Ryan “Pony” Stasik one night at a party and thought to himself “I kind of like that funny kid in patchworks.” Weeks later, they started Tashi Station, which would grab Mirro and Cummins’ attention. Brendan convinced Ryan that they should start a band together with Mirro & Cummins. “You quit your band, we’ll quit ours.”

Brendan studied some classical guitar while playing with the band early on, and shortly after taking a couple lessons from Jake before he was in the band, he was writing guitar riffs like the main one from DBK. And once Jake was in the band, Brendan’s dual guitar lead songwriting expanded to places he couldn’t have possibly imagined. Brendan has become an outstanding vocalist, guitarist, improviser, and composer over the years, when he’s on, he’s unstoppable. Maybe even impervious, as Mike Tyson would say.

Sociologists marvel at the enigma that is Joel Cummins, one rarely finds an only child like Joel lose in the wild. An eternal optimist and beacon of positivity, it takes more than a broken keyboard and curfew mix up to rain on Joel’s parade. Unbeknownst to many, Mr. Cummins actually hails from Metropolis, Illinois, growing up mere streets away from Superman, giving him a supernatural ability to amass both vintage & current keyboards. After years of rigorous piano studies, Joel expanded his arsenal to include more than 119 keyboards (after intense negotiations with the crew, Joel’s setup has been limited to six, occasionally seven keyboards, in his live rig). Beyond his extensive keyboard wizardry, Joel brings many other valuable assets to the UM organization. His knowledge of tour routing and keen market analysis proves invaluable to the management team. However, his show ideas must occasionally be nixed when it’s clear he’s attempting to route the tour into his next exotic vacation. Four nights in Bali, really Joel?

Joel’s passions extend far beyond the musical realm, with a love for travel with his wife Dasha, great cuisine, chatting up strangers and generally making the world a better place whether he’s on the road or at home in Venice, California. His energy is infectious and despite his age, he still throws a pretty mean spiral. The moniker of Joel Montana rings true when he’s on the field as UM’s quarterback.