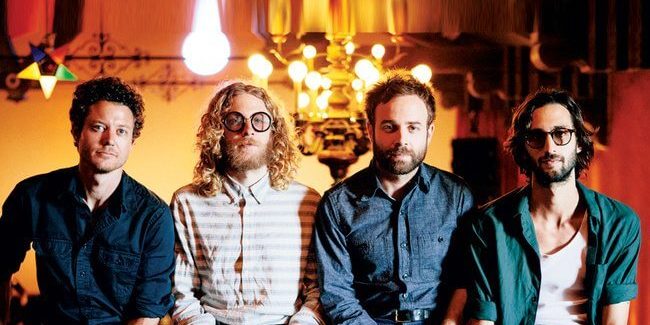 Dawes has come home. After recording its last two albums, Stories Don’t End and All Your Favorite Bands, in Asheville, North Carolina, and Nashville, respectively, the Los Angeles band has returned to the city that has been both home and inspiration since its inception in 2009 to record its fifth album, We’re All Gonna Die, with longtime friend and Grammy nominated producer Blake Mills at the helm.

Mills had been in bands with Dawes founder Taylor Goldsmith since they were in junior high together, but they hadn’t worked on an entire project together since Mills left the band’s early incarnation, Simon Dawes, in 2006 after the release of its well-regarded album Carnivore.

It was clear from the onset that home was much more than a physical place for Dawes. It was a state of mind. For the band-guitarist/singer Taylor Goldsmith, drummer Griffin Goldsmith (Taylor’s younger brother), bassist Wylie Gelber, and new keyboardist Lee Pardini, who took over from Tay Strathairn last fall-it also meant getting to a point where everyone felt they had found a sound that was uniquely their own, equivalent to an author finding their own voice.

“The dream has been not to have someone say, ‘You sound like Warren Zevon in this song or Bob Dylan with this song,’ but where someone hears a first few notes of a track, even before the words come in, and they know it’s Dawes,” says Taylor Goldsmith. “And they say, ‘That’s Wylie, that’s Griffin, that’s Taylor, that’s Lee. That’s the way they play together.'”

“I think we’ve finally done that on this record.” All of their records seemed to have been in service to getting to that point, each album willfully different, every one a point on a continuum. First, the acoustic-based folk-rock and close harmonies of North Hills that brought to mind nothing so much as the Band’s Music From Big Pink. The cosmic country-rock of Nothing Is Wrong, an album that conjured up visions of Gram Parson’s Nudie suits. The smart, wordy, Joan Didion-inspired Stories Don’t End, then the literate, post-breakup yowl of All Your Favorite Bands, with its crisp lyrics and Dire Straits guitars, masterfully capturing their live genius in a way none of their other albums had.

“I think how we got here is our ambition level and discipline to be honest,” explains Goldsmith. “When we worked with Dave Rawlings on All Your Favorite Bands, we were searching for a representation of what we did on the stage. Once we got that, we wanted to fuck with people’s perceptions of us.”

“From the first song I wrote, ‘We’re All Gonna Die,’ it was clear that this wasn’t going to be a folkie record at all. This was an opportunity for us to be a new band. Not just a rock band, not just an alternative band, but a new band. One that maintains all the weird personality traits that our other records might have had, but that also brings them out even more.

“With this record we went in thinking, ‘How do we create something that’s coming out of the speakers that forces someone to say, “What is that How did they do that”‘ There’s sounds on ‘We’re All Gonna Die’ or ‘Roll With the Punches’ where people are like, ‘How did you get that guitar tone’ It’s not even a guitar,” laughs Goldsmith.

It’s something that fans hardly expect from Dawes, which has always bridged generations and genres, writing music you feel you already know, with a familiarity and a resonance that seemed to echo from earlier times in rock’s great canon. It’s one of the reason they have found great favor with classic rock artists such as John Fogerty, opening up for him, acting as backing band for Jackson Browne and Robbie Robertson, even appearing on Robertson’s album How to Be Clairvoyant. In 2013, they opened for Bob Dylan for six weeks.

“I have to say Blake Mills has challenged me more than any producer I’ve ever worked with,” says Goldsmith. “And that’s a good thing. We can read each other’s minds: The two of us learned music together, and we were sitting next to each other when we were in AP Theory class. It’s like we have the exact same set of tools.”

But those tools are used in astonishing ways on We’re All Gonna Die, with Mills guiding Dawes into much deeper waters, crafting a record that is much more bass-heavy and keyboard-centric than any of their others, recalling some of the sonic explosions that Kanye West and Bon Iver have set off on their recent albums.

Mills has distorted Dawes’ formerly pacific sounds by adding futuristic noises, anxious beats, an occasional island sensibility, and even the messed-up plunk of New Orleans-style piano on “As If Design,” which attempts to solve one of life’s bigger conundrums, amplifying one of Taylor Goldsmith’s familiar themes of trying to figure out both arcane and pragmatic mysteries about life and love.

From the disorienting synth sound that kicks off the album’s lead track, “One of Us,” Dawes’ paean to not fitting in, to the buzzy stutter of “Quitter,” with its metaphysical uncertainties, to album stand-out”When the Tequila Runs Out,” with its found and familiar sounds used in disconcerting and unnerving ways, as jarring as the debauched hipster party the protagonist attends, this is a new beast.

“I know it’s not anything like All Your Favorite Bands, and I know it’s much stranger, but in some ways it’s much simpler,” says Goldsmith.

Simpler in terms of winnowing down some of the lyrics, compressing the stories, saying less and meaning more, like the very best novelists. In fact, it would be fair to say that Goldsmith is perhaps more writer than he is musician-casting no aspersions on the multi-instrumentalist’s musical acumen. We’re All Gonna Die is dense with stories and brilliant, telling images that are more like movies than four-and-a-half-minute songs, all containing a moral, a proverb, advice or hope, like a scrap of paper tucked instead a Chinese fortune cookie, nudging listeners towards understanding, clarity, or at best, enlightenment.

“There’s a difference between art that makes a suggestion and art just that’s just disruptive. Anyone can pick up a guitar and say, ‘She left me, I’m heartbroken.’ That’s going to do something to people in the audience. They’re going to feel something. But if you leave it at that, they just feel stuck in the same place as you are. But if there is some sort of suggestion, like ‘here’s how I moved on and here’s why it’s okay,’ then at least there’s potential for a listener to feel empowered. That’s what I try to do in my songs,” says Goldsmith.

This time out, the songwriting responsibilities didn’t fall only on Taylor Goldsmith’s shoulders. Six of the album’ songs were co-written with Blake Mills and two with Jason Boesel, Goldsmith’s longtime friend and former member of Rilo Kiley. Mills and Boesel also wrote one together, “Roll Tide,” which takes the University of Alabama’s football war cry and turns it into a romantic lament.

But what you hear most over the span of the album’s 10 songs is joy and camaraderie, from the close relationship between the band members to such friends as Jim James, Jim Keltner, Brittany Howard and Will Oldham, who all make an appearance on “When the Tequila Runs Out,” and Mandy Moore and Lucius’ Holly Laessig and Jess Wolfe, who pitch in their lovely voices on “Picture of a Man.”

“I feel like listening to the record, it’s four players who are really in love with each other and want to support each other. Nobody felt like they needed to step out. I don’t think we were like that before,” Goldsmith says. “It feels like joy. It feels really good.”

“What I like most is the risks we’ve taken. I know we have always taken steps that help us get to the next level even when we don’t know where it’s going to take us. But we just know that it will take us somewhere. And it has. It’s taken us to a place that feels right.”