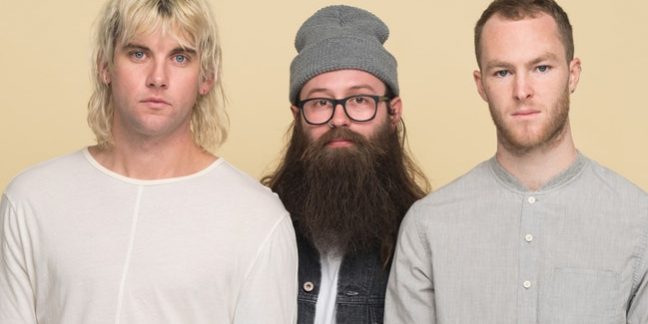 Judah & the Lion released their second EP, Sweet Tennessee, on April 16, 2013, and it charted on the Billboard charts on May 4, 2013. The placements were at No. 2 on the Bluegrass Albums, No. 9 on the Heatseekers Albums, and at No. 15 on the Folk Albums.

Judah & the Lion released their debut full-length studio album, Kids These Days, on September 9, 2014; it entered Billboard‘s Heatseekers chart at No. 2 and the Folk Albums chart at No. 4 its first week out. In addition, their single “Kickin’ da Leaves” accumulated more than one hundred thousand streams in two weeks after release and made Spotify’s VIRAL 50 Chart alongside Meghan Trainor, Fall Out Boy, Betty Who, and Karen O among others.

During their touring schedule in support of Kids These Days, Judah & the Lion opened for Mat Kearney and Ben Rector

Like Kids These Days, Folk Hop N Roll was produced by award winner Dave Cobb (Jason Isbell, Sturgill Simpson, Chris Stapleton). Cobb captured the band’s new songs in a series of quick, inspired takes, aiming for performances that sounded real and raw rather than polished and perfect. Everything was done in just two weeks. The goal was to fuel the album with the same electricity that fills the band’s live shows.

“There’s no boundaries,” says frontman Judah Akers, who shares the band’s lineup with drummer Spencer Cross, mandolin player Brian Macdonald, and banjo wiz Nate Zuercher. “We wanted to make something raw, something with attitude. We all grew up loving these hip-hop beats, so why not make an album that has the grit of Run DMC or Beastie Boys, along with all the folk instruments that we play?”

On January 12, 2017, the band made a late-night appearance on Conan O’Brien

Judah & the Lion toured extensively through the US in support of Folk Hop n’ Roll including headlining shows throughout the country. The band also made festival appearances at Bonnaroo, SunFest and Hangout Fest and opened for Twenty One Pilots on their Emotional Roadshow Tour and select dates with Kaleo.

Inspired by how their genre-blending style was connecting with fans, Judah & the Lion-headed back into the studio in early 2017 to record 4 brand new songs dubbed the Going to Mars Collection, which, when combined with Folk Hop N Roll, makeup Folk Hop N Roll Deluxe. On March 17, 2017, Folk Hop ‘N’ Roll Deluxe was released. The rebooted version of the album includes the band’s string quartet arrangement of “Take It All Back,” and the equally high energy and anthemic “Suit and Jacket” which peaked at #4 on the Alternative Radio charts.

“This record was made for the live show,” Akers promises. “Our shows are all about the experience we share with our fans. We know that people work everyday jobs or go to school, and they’re dealing with life, and yet they’re still choosing to spend the night with us. We don’t take that lightly. We give them an experience. We throw an absolute rage. And all the songs were made with that in mind. They’re fun, carefree, and youthful, and we live our lives that way, too.”

Anthemic and wildly creative, Folk Hop N Roll is unlike anything else in modern music. It’s a rule-breaking record, with Judah & the Lion creating a sound that belongs entirely to them. From the earthy stomp of roots music to the bold bounce of hip-hop, Folk Hop N Roll casts a wide net, proof that Judah & the Lion – who are now four releases into their career – have developed quite the roar.

Judah & the Lion toured extensively through the US in support of the Folk Hop n’ Roll Deluxe album including sold-out headlining shows throughout the US, Canada, and Europe. The band made festival numerous appearances including Music Midtown, Sloss Fest, Firefly, Forecastle, Governors Ball. The also opened for Incubus and Jimmy Eat World on the 8 Tour in the US as well as Kaleo’s Express Tour in Europe