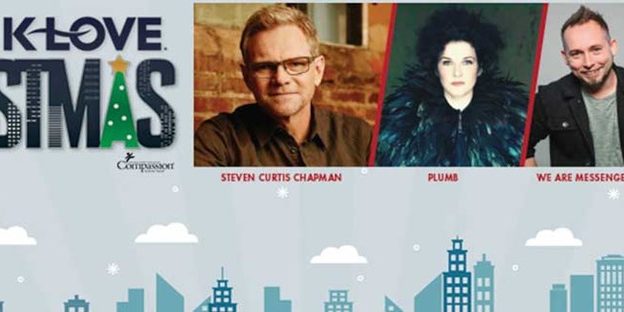 K Love Christmas Tour 2017 features Steven Curtis Chapman, Plumb, We Are Messengers, and Marc Martel. Experience a night of Christmas favorites and top hits from the artists you love! Celebrate the reason for the season with your family and friends on this unforgettable night.

A songwriting trailblazer from Paducah, Kentucky, Steven Curtis Chapman is one of Christian music’s most prolific artists with twenty-three albums to his credit.

Before he was the household name in Christian music, Steven grew up in a tight-knit family in Kentucky playing the guitar and singing. Given his early love of music, it really wasn’t a surprise when he traded in his pre-med major in Kentucky for a shot at pursuing music in Nashville.

After writing a track that was recorded by The Imperials, Steven eventually signed a songwriting deal and penned songs for other artists before releasing his first album, First Hand in 1987. Another project, Real Life Conversations, would follow a year later, and Steven officially had his breakthrough in the music scene.An outspoken advocate for adoption awareness, Steven and his wife Mary Beth adopted three daughters from China, Shaohannah, Stevie Joy and Maria Sue.

In 2008, Maria was killed when she was accidentally run over in the family’s driveway. Steven channeled the pain from that tragedy and his ultimate hope in God into his album Beauty Will Rise, which featured “Heaven is the Face,” a song written in remembrance of his daughter. Describing the songs as his “personal psalms,” Steven was able to share his and his family’s story of hope in the midst of sorrow in mainstream media outlets including “Larry King Live,” “Fox News” and “People.”